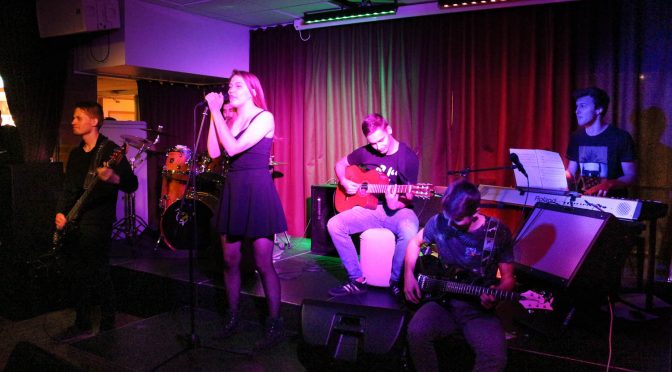 On Friday 10th November students music band debuted in Smuget. The concert of the international band was a huge success.

The 50% international music band consists of five members. Pavel Brlica from Czech republic, Norwegian Simon Fjælberg and German Luca Sternecker play guitar, Belgium Ilias De Wit plays on piano, Sarp Tezonarici from Turkey plays drums and finally Anastasia Fergyuson from Belorussia is the singer. The band got unintentionally together at the beginning of the semester and debuted in Smuget two weeks ago.

“I always wanted to have a students music group performing here at the university.”

The concert attracted over hundred people to Friday’s event. The crowd was so thrilled that they requested several repetitions and the band played some of the songs from their repertoire again.

“I think, people have enjoyed Nirvana and The Cranberries songs the most. But I really hope they enjoyed other songs as well,” said Pavel Brlica and added: “The atmosphere was electrifying! We were quite nervous at the beginning when we saw how many people came, but it was awesome, lifetime experience!”

The band is going to play in Smuget again next Friday 1st of December.