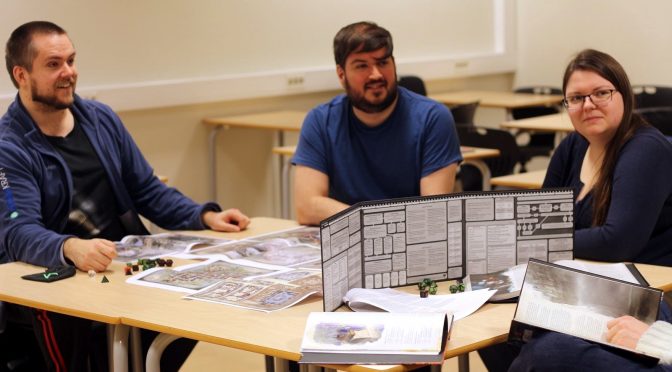 «’Yer late, elf!’ came the rough edge of a familiar voice. Bruenor Bronzehammer walked up the back of his dead foe. Disregarding the fact that the young dragon lay on top of his elven friend. The dwarf’s long, pointed, often broken nose, and graystreaked – though still-fiery red – beard, came as a welcome sight to Eowyn. ‘Knew I’d find ye in trouble if one came out an’ looked for ye!’” says Anders Eielsen (26) – who is the Dragon Master of this evening’s Dungeons & Dragons game, and also a HiMolde student.

The fictional game action takes place in the Middle Ages amongst supernatural creatures armed with sword and magic. The Dragon Master leads the game and interprets what is going to happen using the Master’s guide, but even he does not know everything. The dices also decide what the course of the game will be.

Janne Seljeseth Dybvik (23) – also a HiMolde student – joined Molde Spilleklubb last year, but even before that she started playing actively in a sister club in Ålesund. Today, she has the role of elf in this world of fiction and says that by playing roleplay games everyone can develop creativity and imagination, train their minds and go out of the frames of ordinary thinking.

The number of players is unlimited, but the game is best played within the group 4-10 people who choose heroes themselves.

Dungeons & Dragons (D&D) is a fantasy tabletop role-playing game originally designed by Gary Gygax and Dave Arneson. It was first published in 1974 by Tactical Studies Rules, Inc. In the D&D fantasy role-playing game, dragons are an iconic type of monstrous creature used as adversaries or, less commonly, allies of player characters. Other heroes are elves, gnomes, hobbits, vampires and Jedi guides. D&D’s publication is commonly recognized as the beginning of modern role-playing games and the role-playing game industry. Source: Wikipedia.

“We play live and we are free! The latter cannot be achieved by playing computer games where you are limited by the game settings and computer’s hardware properties. But it’s the same as with computer games – you become addicted,” says Jo Vegar Haugen (31).

Molde Spilleklubb was originally founded as a club where people could meet, socialize and play all kinds of board games every other Thursday from 5 PM till 9 PM at Molde high school. After becoming a member of Hyperion – Norsk forbund for fantastiske fritidsinteresser, Molde Spilleklubb expanded to offer members a fantasy world of roleplaying each Tuesday – at the same time and place.