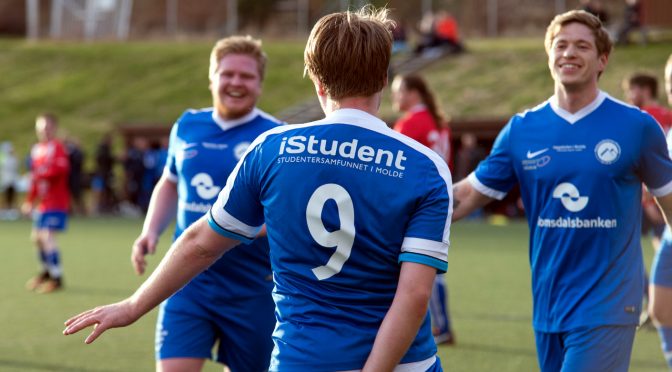 They made history: In their very first league match the players of Moldestudentenes Fotballklubb defeated Eide og Omegn FK 3 with 7-1 (4-1). The freshly formed team now heads the table in division 6.

Thursday, it finally got serious for the team of Moldestudentenes Fotballklubb when referee Sayed Hojat Hedayati from RIval at 19:20 sharp blowed the starting whistle at Lubbenes Kunstgressbanen in Molde.

But there was no sign of beginner nervousness. The players around team captain Trym Brakstad took the control over the match from the very beginning and had their first big chance after 15 minutes after a corner kick, but Eide’s goalkeeper Brage Hammerbukt was on the right position. Just in the counter maneuver Eide checked the skills of Molde’s goalie Martin Jansrud – again it was the keeper who won the battle.

From then on, the match gathered pace, but mainly took place in front of Eide’s goal. In minute 18, Mads Kristiansen finally perfected a well-created play to make the 1-0 for Moldestudentenes FK. The 50 spectators at Lubbenes KGB, mainly fellow students of the players at HiMolde, became witness of the first official goal for the team in its young history.

The team in blue jerseys kept on defending very clever; the defense around Erlend Bransdal and Truls Vestnes was almost permanently positioned at the half-way line. The former then succeeded with scoring the 2-0 in minute 27.

The team of Eide did not even get the chance to assimilate when everything went quickly and the score changed to 3-0: Again, Molde managed to occupy the penalty box in front of Eide’s goal, and Marcus Jørgensen poked the ball home (29.).

This should not be his last goal of the evening. Only ten minutes later, he again did not miss the chance to score after three Molde players tricked Eide’s defense, and he only had to bowl the ball into the net – 4-0.

Despite this clear lead, Moldestudentenes MFK continued pushing hard, not only with the ball, but also verbally; they spurred on and issued directions to each other over and over.

However, seconds before the half-time whistle, Eide’s Kristian Myklebust Lysgård took advantage of a lack in concentration in Molde’s defense to net the 1-4, which also was the half-time score.

“We never lose”, Molde’s coach Erik Skjørsæther had said earlier this season – seemed like his players were to prove him right in the first competitive match in Norway’s division 6.

In the second half, Skjørsæther changed his team on several positions. What did not change, was the playing power between the two teams; Molde still did not hand over the reins over the match. Only one minute after the restart, Molde hit the goal post.

In minute 53, referee Sayed Hojat Hedayati brandished the yellow card to Molde’s Ola Strugstad after a tough foul to Tage Listaul, who shortly afterwards had to leave the field hobbling.

Again and again Eide’s players tried to encourage each other – completely in vain. Even though the game is more leveled at this point, it is almost only Molde that bowled one offense after the other. Eide’s goalkeeper Hammerbukt even had to be replaced after getting a bloody nose.

Still, it took until minute 69 to the next goal: After foul on Jamie Sagstuen, Molde’s team captain Trym Brakstad curled the free-kick via the crossbar inch-perfect into the right upper corner and made it 5-1. This was the final decisive move of the match.

Nevertheless, Molde did not seem to have enough for the evening. Again Brakstad checked the skills of Eide’s substitute keeper Listaul, who could only spill the ball, and Sebastian Olafsen succeeded in the second attempt (76.). Finally, Jamie Sagstuen ensured the final score with his goal to 7-1.

Despite this superior performance, where Molde won the majority of the tackles and succeeded with commitment and effort, head coach Erik Skjørsæther was still not completely satisfied: “We could have done much better – everywhere. If the opposing team had been better, we definitely would have lost today. So we have to improve for the next matches.”

Moldestudentenes FK’s next chance will be the home match against Isfjorden /Åndalsnes 2 on Friday, 4th May.