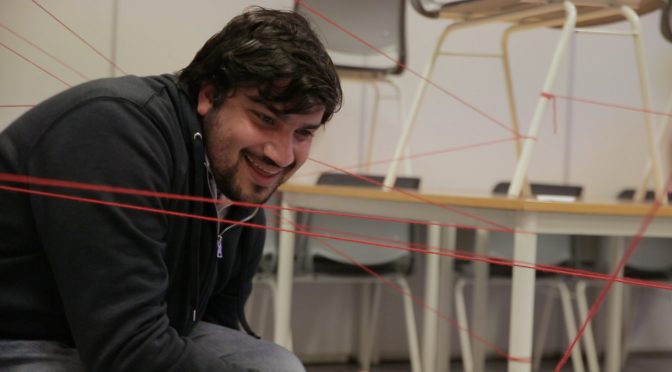 Scene from the Panorama-video of the fifth Get together-party at Molde campus.

The Get together-party for master’s students in logistics took place on October 9th and celebrated in great fashion it’s anniversary. After four previous years of initiatives and constructive feedbacks, this fifth edition was a great success and appears to have found the recipe to bring students from all over the world together.

During a pleasant and original evening based on the theme of Greek mythology, students separated in five groups had to compete against each other in order to complete as quickly as possible the organizing crew’s creative challenges. Those were as unusual as having to find the hidden pieces of a homemade puzzle, getting out of a Mission Impossible-like situation or managing to keep a candle burning while completing a lap around tables.

Once completed, they all led to the final and most simple task of the night: find the treasure hidden by the gods in Molde University College’s canteen. In a last effort to finish on top, and despite not being  apart of the first team who arrived on site, it was Daniel Moreno – the Mexican member of group three, – who managed to be the chosen one and offer the victory to his team.

Happy about the win, he shared the secret of his team’s success by highlighting “the collective effort” that carried his group throughout the night and that seemed present in all teams. He was then joined by the rest of the students who, far from being disappointed about the results, turned their focus on the warm pizzas waiting for them to be enjoyed.

Sitting down with one or more slices, the students continued to get to know each other more and enjoyed the cozy environment relieved from cultural barriers.

Asked about the assumed separation that exists between Norwegian and international students, fellow student representatives, Norwegian Kristina Aalvik and Belarusian Darya Rubchenia, highlighted the importance of a night like this one : «It is very important because we’re going to study for two years together and it can sometimes be difficult to bring people together.»

Darya Rubchenia continued, explaining that the previous years were useful to get a taste of what was possible to achieve and that it was the right time to step up : «This year we wanted to change something because we previously didn’t have the possibility to move around in the building, so we decided to make this quest.»

With the help of their program coordinator, associate professor Arild Hoff, and the volunteering of other students, they handled the organization perfectly and it was apparently well-perceived by the students, as Kristina Aalvik explained : «It went great! They had fun, we’re getting some positive feedback, and that’s what we wanted.»

Asked about the possible perceptions that some international students have regarding Norwegians and the fact that it can be difficult to build relationships with them, she believes that “it’s necessary” to have this kind of event in order to break the ice : «It’s a nice way to show that we’re not that shy.»

Helpful throughout the evening, including during the reception of the pizzas, Bangladeshian Shahadat Hossen admitted that he was a bit surprised when he arrived in Norway and perceived this so-called shyness: «Here, it’s very different from my country. When you’re in the streets, you don’t see many people talking to each other and gathering. […] People from Norway are very different from my country’s culture.»

As cultural differences necessitate some kind of adaptation, it can also be perceived as a huge chance to experience different viewpoints. Originating from Pakistan, Qasim Hussain shared a sense of recognition from what he has been able to experience since his arrival in August: «Here people are so helpful and humble, you feel free to talk with them and you enjoy the discussions. […] It is difficult to judge after only two months, but even though my country and Norway both have a rich, but different culture, I feel like international and students from Norway are not much different.»

Qasim’s viewpoint was not very different from what other Norwegian students perceive. Despite also stating that Norwegians are generally shy, Kristin Braathen said that: «It’s easier to talk to people we know, but if someone takes contact with us, we’re happy to get to know them.» Konrad Mikael Kokot also agreed, explaining that locals sometimes need “a little push” in order to engage with other students but he added that the differences between individuals are actually what makes it special: «We’re all the same, but with our own culture, and it makes us unique, but similar, in the same time.»

Finally, and as it appears that this year’s Get together-party has been a great success, Daniel Moreno’s final words illustrate perfectly the idea behind the event: «It was a great time for all logistics students. It was a good time to see that we have more in common than differences between us, no matter where you come from, who you are and who you want to become: a monotonous student evening can be turned into something interesting when people gather and share this kind of experience.»

3rd YEAR: There is still a gap between students

4th YEAR: Get together-party for international and Norwegian studens