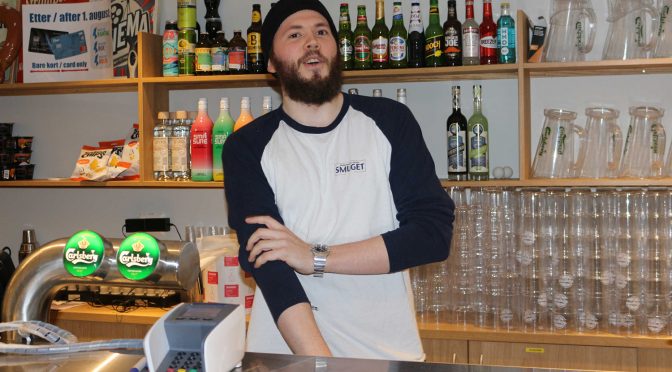 Smuget boss Markus Lilleheil speaks from the heart about the student bar in the A-building on campus, and dreams about a future students house in Molde.

Smuget arise as the perfect and cheapest place to share and enjoy everything from quizzes, theme parties and even mini-concerts – all inside of the University facilities. Nonetheless, the self-supporting business Smuget is struggling in finding its own identity. Being inside of campus represents a challenge for this particular enterprise. To understand the dynamics of this iconic establishment, we interviewed a friendly and long-bearded guy in his early 20’s, with the confidence of someone who has been in charge of a team at least for a couple of months. Markus Lilleheil, current Smuget manager, revealed the pros and cons of the bar today, as well as their future plans. When we arrived at Smuget, Markus was sitting at the bar, waiting for us in front of his laptop and ready to start .

– Markus, could you please talk a bit about the history of Smuget and what is the involvement of the bar in the student nightlife?

– There used to be a bigger bar that was located at ProtoMore, if you know where that is? There used to be a student bar there a couple of years back, but it was too expensive for the school, so they moved to this side. And the history is basically that we have been open every Wednesday or Friday, usually for the past couple of years. We are on school property, so we can’t really do a lot of stuff during the week because it needs to be clean here for the morning after, but you know… We usually have bigger parties, some quizzes, games. It used to be board games nights for everyone.

– For how long have you overseen Smuget?

– Two years, I think? I joined two years ago and pretty much and then I became the boss here (laughs). But yes, for two years about that

– How a student can get involved in the bar?

– We usually take in people every semester, we look for more people every semester. Because there are a lot of people who will join and then find out there is more hard work being behind the bar and they will fall through pretty quickly. Usually, people do not stay longer than a year, so it can be hard for an international student because they end up leaving after the semester is done, and when they leave then we need to find more new people, so is hard to get international students. We look for people who is interested and are social, that’s a huge plus. Because a lot of people can be really nervous when being behind the bar, because people are drunk, and they can get rude, and hard to deal with and you need to be firm, but also social enough to avoid any difficult situations that might occur. And not a lot of people can ‘t handle that, which is the reason why some employees fall through quickly.

– Working in here is kind of a voluntary job or do you have paid staff?

– No, this is 100% voluntary. I mean, we don’t get paid or anything, to stand behind the bar. This is all for the welfare of the student body, all we want to do is to have an option, a place to be, that isn’t in the city. Because we want to have everything here – centralized – where people live. Here they can go drink, they can drink coffee here, etc. And as I said this is 100% voluntary, which is challenging because we are open even in exam periods and people get tired, you know? That’s why we recruit more than what we actually need. So we have from 15 to 20 people, which makes rotation a bit easier.

– About that, where do you get your resources? What is your business model to survive?

– We are a 100% self-sufficient. We buy alcohol and sell it, that is our basic income. We don’t get any support from the school. That is one of the points of this place, and we try to keep the prices as low as possible, considering we don’t have any wages.

– There has been some sort of rumors about some people at the university don’t want you to keep the prize of the beer as lowest as you want. What is your opinion about it? Is it true?

– We haven’t been forced into anything. We have to buy, you know, by special laws in Norwa,, and a lot of those says that you can’t sell anything cheaper than you buy it. That is the whole point. I am not an economist, and also, I don’t decide into prizes that is up to the school, for example if we go 20 NOK per beer, the school is gonna come in and say Hey! Let’s chill here, because that basically means that we are going to lose money, and that is not the point here.

– Changing the subject a bit: What are your plans for the short/long term?

– The plans for Smuget, at long term, ideally, we want to… There are a lot of talk about a student house, like a building that will not be on campus. There is an article on Panorama about that, a couple of months ago. And long term we want to move out of the school, because we want identity, there is no identity to be found on the canteen at the school. You can’t really create the student identity or the identity of the school. I mean, we have this place, and it really doesn’t look like a bar, really! The only thing that looks like a bar, is the actual bar. I think that’s the main goal: to build an identity, within the student body. We want to feel like home, and here we don’t feel like home. It feels a kind of weird to be inside the canteen. But in the short term, we are going to do as much as we can.

UPDATE: Morten Sivertsen Lygresten took over as Smuget leader 11th of February this year – after the interview was done, but before it was published.