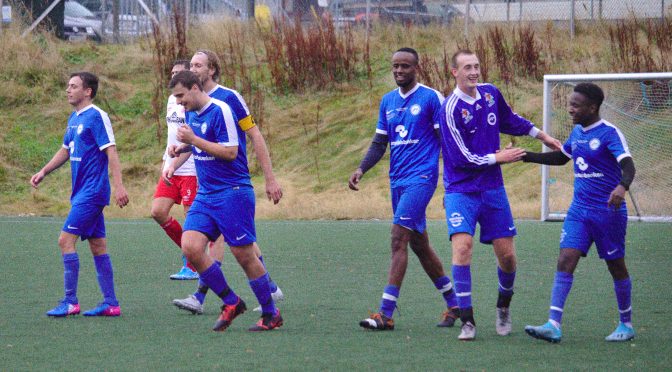 MSI gunners with smile faces after their sixth goal visiting Malmefjorden’s net in the second half of the match. Photo: Rabah Taif

KGB LUBBENES (Panorama): Tonight, MSI will be league winners of sixth divisjon with draw or win against Batnfjord. Saturday’s big win of 8-1 against Malmefjorden boosted the MSI players confidence.

MSI continued to dominate proceedings in the first half by scoring and possessing, and it was 4 goals separating the sides. In the second half, MSI continued to press and stress Malmefjorden’s goalkeeper, with Sindre Fossheim Waage as the eye of the storm.

Malmefjorden 2 looked in trouble against the student football club, they were receiving more goals during second half, while in the last quarter of the match, they got the icing on the cake, as Sindre Fossheim Waage thumped the ball past the goalkeeper and into the net.

In this season, both teams have faced off 2 times, with the last coming in October, 12th during qualification for the fifth division and Sindre Fossheim Waage was the star of the show as he scored a super hat-trick in the last match to complete an 8-1 comeback victory. MSI now have the upper hand with 1 win after a tie match of 2-2 with Malmefjorden 2.

The student football club currently sit at 2nd place on this league’s table, despite suffering a series of problems such as the lack of players, and the problem of no goalkeeper. MSI isn’t a club to give up easily. They’ve returned this season with their eyes still focused on claiming the fifth division. With those great players, they surely have a decent chance to go all the way and get into the fifth division.

Tonight’s 19 pm match against Barnfjord at KGB Årølia in Molde will decide if MSI becomes this year’s league winner.