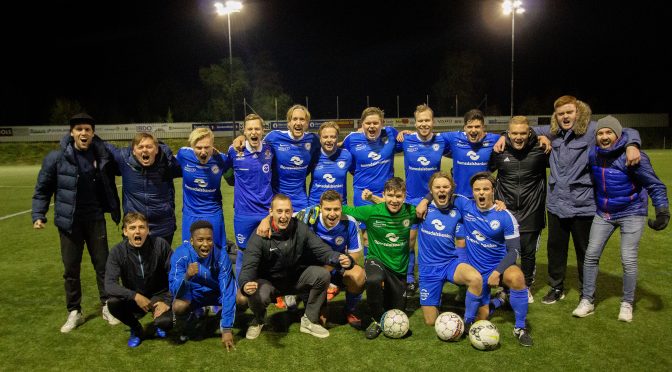 A tie match was enough for MSI to secure the first place in the group, but the champions to be seemed dissatisfied with that option, and decided to finish the league with 35 point instead of 33 by winning the last league match of the season.

In this most incredible of title races, it also took an incredible goal to beat Batnfjord, who proved to be both obdurate and organized, on a fraught evening at Årølia.

It was Marcus Jørgensen’s goal of this match that settled it. It came in the first five minutes of the match, surprising the Batnfjord players and breaking their mood quite early in this ninety minutes journey. The goal propelled MSI towards retaining the title of the league, and a chance of competing to be promoted to the fifth division.

Seven minutes after the first goal, Marcus again decided to stop the journey and kill the match by shooting an amazing penalty kick that found its way to Batnfjord’s net.

This was a disaster for the Batnfjord players, it simply killed them and led them to lose focus and hope. And the chance of recovery for them became almost impossible in front of the MSI gunners.

After 30 minutes of playing, Batnfjord decided to scare MSI and get their revenge scoring, but it seemed like a waste of time against the soon to be MSI champions.

MSI’s confidence, which has grown under coach Isak Tollerud, is now a clear and a present danger. MSI’s next match will be against Isfjorden/ Åndalsnes 2 Sunday 27th October at 16.00 hours at KGB Lubbenes.