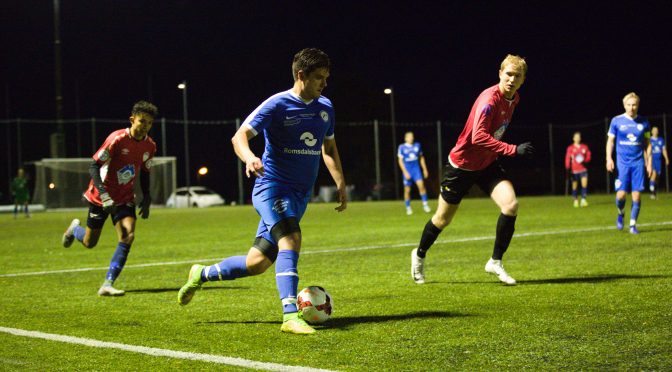 REKNESBANEN (Panorama): With 1-3 at half-time and only 10 players left, MSI impressivley fought back against Isfjorden/Åndalsnes 2 in the second half and tied 3-3 in yesterday’s match.

A hot tie match of 3-3 was taking place in Reknesbanen yesterday afternoon between the host team MSI (The Molde students sport club) and Isfjorden/Åndalsnes 2.

MSI fought back with 10 players

MSI still has a chance to be promoted to fifth division, after they impressivley – with only 10 players on the field- turned 1-3 to 3-3 against opposing team Isfjorden/Åndalsnes 2.

MSI players were early in the match looking happy, unstressed and confident that they woulds make it again, as they always did in their previous matches.

This time, the match proved to be not that easy for the gunners of MSI, as it was difficult for them to cope with the strong, young players of Isfjorden/Åndalsnes 2.

The MSI players opened the match quite early this time as well, by scoring their first goal after 8 minutes. For his first goal, MSI’s Marcus Johansen was lurking 10 meters out, seeing his chance as Isfjorden/Åndalsnes 2 goalkeeper failed to adequately clear a MSI attempt.

The Isfjorden/Åndalsnes 2 players were strong enough to quickly respond and score three consecutive goals in the first half, showing the MSI players that they were the best, trying to mitigate their confidence. After receiving the second and the third goal against them, the student football club players seemed stressed and frustrated.

The pressure was killing MSI in the first half, but after the break they decided to come with new smiling optimistic faces, telling Isfjorden/Åndalsnes 2 that they will never succumb whatever the circumstances.

But the student team had to do with 10 men for most of the second half, after subsutitute and defender Abdifatah Yanya Ali Malin received a yellow card for holding in the the 49th minute and a red card six minutes later when he tripped and used his hand to save MSI from what could easily have been a 1-4 lead for the visiting team.

Again, Marcus Johansen was showing no fear on the biggest stage and demonstrated to Isfjorden/Åndalsnes 2 that he is a goal poacher scoring his second goal in the 67th  minute of the match.

9 minutes later, Trym Malones Brakstad played an amazing corner kick, a kick that was headed by Tobias Wingaard past the visting goalkeeper and setting the end result to 3-3.

In the last minutes of the match, the vistors from Rauma celebrated their fourth goal of the match, but luckily for the students, referee Arnt Ivar Dale and team found it to be an offside fault, and blew the whistle.

A solid win in the next match against Dahle 2 will qualify MSI to be promoted to fifth division play next season.

Do you want to celebrate the student football club success and potential promotion to the fifth division? Be in time to support them in their last match in this journey, which will take place in Dahle Kunstgresspark in Kristiansund this Wednesday at 19.00 pm.