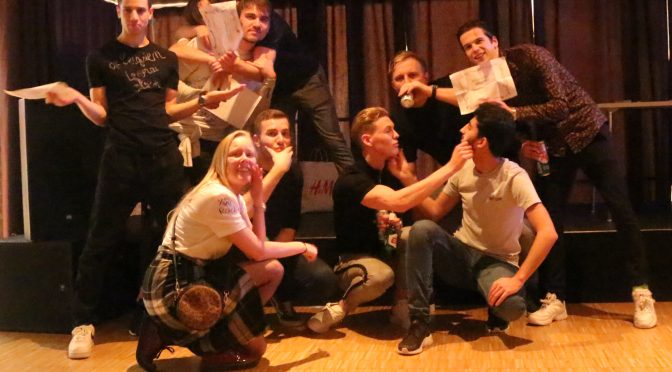 After completing the fall semester at Høgskolen in Molde, it was time to say goodbye to Erasmus exchange students coming from countries as Germany, France, Italy and the Netherlands.

Janne Hermens, head of the evening, and some other organizers, opened the party’s door for students at 21.00 pm, started by putting some coloured flags on the roof, pictures of the same party from previous years were stuck everywhere and a beautiful decoration for the farewell function.

Nice music was played, cheap beers were on the tables and a little game was organized while waiting for other students to gather. Students started gathering for real at around 23.00 pm, there were around 50 attending the party. They were putting white and pink T-shirts. All the students were dancing under lights and colours like crazy, responding to the nice music played by Lubhit Gambhir, an international second year master’s degree student at Molde University College.

Janne Hermens made a moving speech in which she mentioned the exchange students long and deep association with each other, as well as with the university. She wished her fellow students every success in the future, and she ended her speech by giving an honour certificate to each and every one of them. At that moment, Lubhit Gambhir played sad music, making everybody feel emotional about leaving Høgskolen in Molde after 5 months of studies, new friends and good memories.

Janne Hermens said: “For me, it was not merely a school, but it was a combination of culture, new friendship, experience and best moments.”

After Hermens speech, the students started writing their memories, drawing their signatures on each other’s faces and T-shirts. At the end, their T-shirts were all coloured and the function came to an end. They were leaving the party and the university with heavy hearts, casting their last looks at the university.

It looked as they were not really saying “goodbye”, but rather “see you later”.