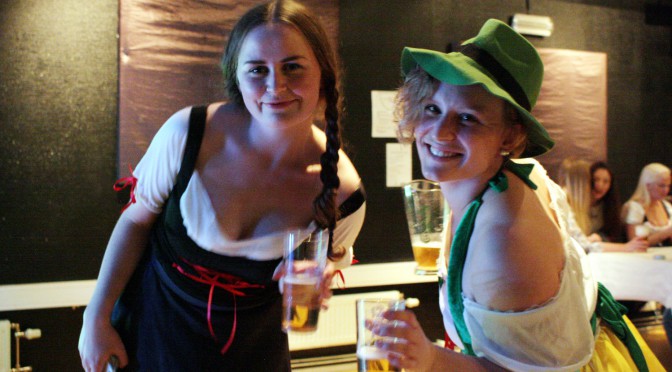 A fun mix of party revellers met in Vallhall, the university college’s student pub, on Friday night to celebrate Oktoberfest at a full-blown dance party that was filled to capacity.

(Student nightlife in Molde – Part 2): Oktoberfest is the world’s largest funfair held annually from September to the first week of October in Munich – Germany, attracting over six million people worldwide, but the pub had its mini version that saw doors open from 11pm.

“We have had this fest in previous years, but it is normally celebrated as a fall party while keeping the Oktoberfest theme,” said Øystein Jahren who is Vallhall’s leader.

From the look of things, whatever theme Vallhall normally comes up with, the end result is an awesome time. On the menu’s list was beer served in big mugs and many students dressed in German traditional attire (dirndls) as guest performing artist going by the stage name of Pico from Ålesund, whose raspy voice and guitar playing skills occasionally turned the crowd into a frenzy, rocked the stage in four sets each lasting for 45 minutes.

“Having performed similar shows for over hundreds of times, I am looking forward to an exciting night with the intention of playing songs from the 70’s, 80’s and 90’s that everyone can sing and dance to,” he said moments before going on stage.

The night took a thrilling turn when Pico called Henrik Eldevik Bortheim, who is studying bachelors in logistics, on stage to play the guitar with him and this prompted lots of cheers and happy chants. The two sounded as if they had previously performed together. but it was surprisingly their first time as the harmonious guitar sounds blended quite well.

“I have been playing the guitar for four years and no one has ever seen me perform before, so this is quite an exciting first moment for me,” Henrik excitedly said minutes after his performance.

As it was highlighted in our first nightlife exclusive, pre-parties are common before clubbing. The pre-party which had begun with a vorspiel at Marko Balaban’s residence, at Molde’s student’s housing, could not have gone unmentioned.

The night ended peaceful with no dramatic drunken scenes. Even if one is not really a clubber at heart, it’s worth going to Vallhall to take your drinks whilst reclining or for meeting an interesting company of people.

See video from Oktoberfest at Valhall: