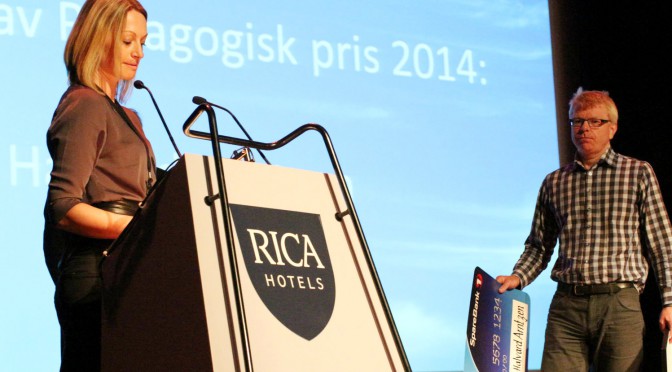 Lecturer of the Year, associate professor in applied mathematics Halvard Arntzen (46), reveals that he is a former guitar player with an unfulfilled desire to relax.

Associate professor Halvard Arntzen (46) – father of a toddler aged three and soon expecting his second child – was awarded the Pedagogical Award for 2014 in the beginning of this semester.  The prize of 15 000 NOK has been awarded since 1996 to reward good educational effort at Molde University College (MUC). Students and employees propose candidates and a jury consisting of the deputy rector and student members of the MUC board identified Arntzen as this year’s winner. The jury stated that Arntzen is a good lecturer with a practical approach to the subject he teaches:

“He is thorough and balances between basic and advanced theory. In addition, he is dynamic and always updated. With his way of being, he shows respect for students. He is easy to contact, easy to ask and pleasant to discuss with. He helps students to learn, by providing compulsory exercises and gives good feedback.”

In response to this acclamation, he spared some minutes to shed some light on his personal take to the prize he won, career and life in general.

– What do you think makes you quite popular among students?

– First of all it was an honour to win the award, but I don’t believe that I’m popular among all students. I try to make the subject easy to understand and help out in the best way possible.

– Who has been the greatest inspiration in your teaching career?

– Many of the teachers while I studied at the University in Oslo were great, not showing off or trying to make it exciting, and really knew their topic. In particular professor Tom Lindstøm made his approach to mathematics appear easy and lively.

– How did you spend the money that you won?

– I’m buying a new house and housing in Norway is quite expensive, so the money was spent on the house purchasing.

– What is your favourite quote?

– What advice would you give others who look up to you for inspiration?

– Don’t worry about things you can’t do anything about.

– If you were to be an animal, which animal would you choose and why?

– I would probably be some kind of a cat, because I admire their ability to relax and that’s something I would strive for.

– Which movie character would you identify yourself with?

– I would not really associate myself with a movie character, but an actor I enjoyed was the late Philip Seymour Hoffman.

– If you were stuck in a desert, what are the the most important things you would wish to have with you?

– Water of course, Kindle and internet access, so that I can download a book about how to survive in a desert.

– What has been the most embarrassing moment for you?

– I can’t really remember any particular moment, but perhaps the feeling when walking out of a lecture knowing that students did not really understand what I taught.

– Would you rather dye your hair red or eat raw meat for a week?

– Most people would say that my hair is already red. I would like to try the raw meat.

– Besides teaching, which talents do you have that others are unaware of?

– I used to play the acoustic and electric guitar years ago, so I can say that’s a talent of mine that many aren’t aware of.

– Would you rather wake up with a different face and same gender or different gender and same face?

– I would rather have a different face and same gender.

– What is the one food that you would never give up?

At the end of it all, his love for teaching relies entirely on impacting knowledge to others in a simple manner, while acknowledging the fact that students should study what they enjoy rather than what the job market may dictate.