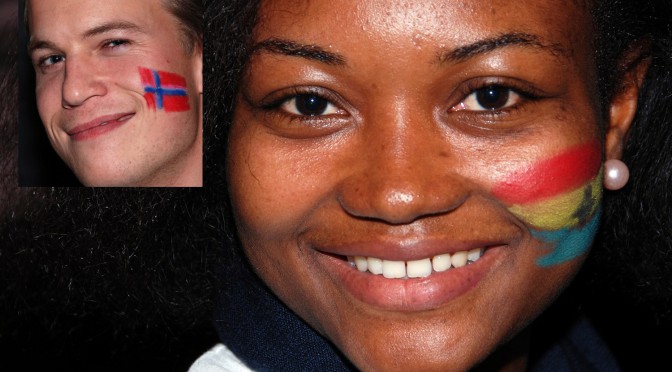 A night at Valhall with games and laughter broke the ice between international and Norwegian students.

First year students enrolled in the Master of Science in Logistics program recently took part in their first team-building event at Valhall organized by their quality team. Students that participated formed six teams and competed in five different games filled with passion and fun. After each game points were assigned to teams for the first three places. In the end, after all five games were finished, the first three teams won exciting prizes.

Student Luiza Oancea of Romania, member of the MSc quality team and one of the driving forces behind the event, explained why she and fellow student Simen Strøm Nordnes came up with the idea:

“What were the ideas for team-building in your quality team?”

“The first idea was to make a night with some games where people are forced to work in mixed teams. They can interact with people that they otherwise would not talk to during the courses. “

“What were your venue choices?”

“Valhall was our first and only choice since it is really close to campus. It is easy for people to reach and it does not cost that much to rent. We didn’t really consider other choices but we knew we wanted to have our event inside.”

“What were the preparations for the quality team like?”

“Besides booking Valhall, we ahad to buy snacks and drinks, think about prizes, divide the responsibility for the games and discuss what kind of games to include.“

“How did you get the event financed?”

“At first the idea was brought up only in our quality team. Then we contacted the program coordinator, associate professor Arild Hoff, to see if the university can somehow sponsor this event so we can offer some prizes. Arild helped us very much. He took part in the meetings, sent mails with minutes from meeting, took us shopping and finally took part in the event. Apparently, the school had plans to do a similar event. They had budget for this kind of event, but they did not proceed with implementing it. They were happy when we came up with it and we volunteered to do the event. It was generous budget of 10 000 kroner.“

“What was the turnout?”

“Out of sixty seven students we got almost forty students. Off course it could have been better. We were aiming for everyone to participate. We had less Norwegian students participating in the event, but we were expecting that. “

“We were talking to them during the classes and asked them why they can’t come. Some Norwegian students are living outside of Molde so it is difficult for them to drive to Valhall and then go back home. Some students just were not interested in getting to know people in the course.“

“What about the prizes that quality team picked?”

“We wanted to give prizes that will force the students to go out together and socialize. For first prize, we offered a gift card for a dinner at restaurant Vertshuset, so that all team can enjoy it together. Second prize was a gift card to café Kneippen and for the third prize we offered some school souvenirs.”

“It has been more than a week since the team-building. Do you feel that something changed?”

“The Norwegian students that were at the event are much friendlier and they are talking more with the international students. We still need to organize some more activities in order for people to become more comfortable with each other. This event was just a start. “

“What about party team building?”

“The Norwegian students like to party much more than the international, or at least to drink much more. It is an idea, we just didn’t discuss it yet. “