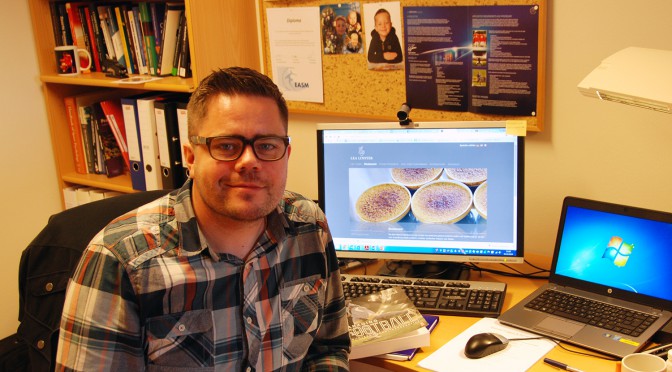 A passion for fine dining drove PhD-student Birnir Egilsson to work in Michelin starred restaurant kitchens. Now he is applying his passion for sports on supply chain management.

When Birnir Egilsson was four, his parents opened a restaurant.

“I spent a lot of time in the kitchen with my dad peeling potatoes and playing there,” Birnir says.

Growing up in a small town close to Reykjavik in Iceland, Birnir spent a lot of his free time doing sports like basket, handball and football. As a young man, he was not interested in school. He started working in the kitchen of his parent’s restaurant, went on to work in several of Reykjavik’s restaurants – eager to learn more about culinary art – and studied to become a chef.

“I was really into cooking. I loved it,” Birnir says.

After graduating, he moved to Luxemburg to work at the kitchen of Léa Linster, a restaurant rewarded with one star in Guide Michelin.

“The head chef was Icelandic. He knew who I was and set me to work on all stations in the kitchen. It was a fantastic experience. In Iceland, we did not have a lot of fresh vegetables, fruits and herbs. In Luxemburg, bordering to the big culinary nation of France, it was amazing for me to just go to the market and buy everything fresh,” Birnir says.

After eight months, Birnir moved to Oxford shire in England where he had gotten an offer to work at Belmond Le Manoir aux Quat’Saisons, a restaurant that can pride itself with two of prestigious Michelin stars.

“One of the restaurant owners was Raymond Blanc, one of the most famous names in culinary world,” Birnir says about his decision to move from Luxembourg to England and work with forty to fifty chefs catering to about hundred guests every evening.

“I was working as leader of four different stations in time at the restaurant. It was hard work that demanded leadership skills and a good palate. I have never been in the army, but some say that to work in a restaurant kitchen like that is similar to being in the army. It is a high-pressure environment, so you need to be well prepared and organized. I learned a lot from working there,” Birnir says.

After two years, Birnir had enough. During his twenties, all of his friends had fun while he was working six days a week, twenty hours a day. He rejected some offers to work in the USA and returned home to Iceland.

“I worked in an Italian restaurant together with great colleagues. I thought I was the best chef, of course, but I had never cooked Italian before, so I had to start learning again,” Birnir says.

After a while, Birnir felt uncomfortable with the pressure of the kitchen environment. He then started on the next episode of his life. He went back to school.

His parents and partner were taken by surprise by his decision, as school had never been his cup of tea, but four and a half year later Birnir received a bachelor in engineering management. The financial crisis hit Iceland hard in 2008. Birnir’s parents moved to Norway. The year after he followed them, aiming to study for a master degree abroad.

“I worked as a chef for a year to learn the language and get to know how everything functions in Norway. After that I applied to three schools,” he says.

While searching for his master degree Birnir came by a school website that offered sport management. Being a lover of sports, the topic caught his interest.

“If you are a sport manager you need to deal players that are younger than yourself. They often have much higher salary than you and a lot of power. You have to deal with sponsors, market, society, media and owners. It is an interesting and complex environment,” Birnir says.

In 2010, Birnir’s young family moved to Molde, which they viewed at the perfect small town for the kids to have a safe environment and get a good education, and Birnir started to study for his MSc in sport management.

“I did quite well in my studies. My master thesis was something that I enjoyed doing. I proved to be good academic, hard worker and managed to establish a good relationship with the school. In my opinion I was really good PhD candidate,” Birnir says about his decision to continue to study for a PhD in logistics.

Birnir’s research focuses on supply chain management in the football industry. His experience from being a master chef is in many ways relevant to what he is researching, now on his first year of the PhD-studies.

“A restaurant has everything that makes a supply chain. It has logistics, it has transport – also in the form of waiters, warehousing in fridges and manufacturing in the kitchen. It has ingredients, suppliers, end products, customers, coordination, strategic supplier relationships, customer relationship and information flow,” he explains.

And adds: “It’s fantastic to show up every day to the exciting environment at Molde Campus, travelling to conferences, meeting other academics and make new relationships. I enjoy it a lot.”

Here is Birnir’s recipe for a student soup that is nutritious, cheap and easy to make.

1 can of chopped tomatoes

1.2 liters of chicken or vegetable stock (or water)

A little lemon juice (may be omitted)

This is what you do:

Chop onion, chilly and garlic finely. Cut carrots and celery. Heat the oil in a pot and simmer the onion, chilly, and garlic over medium-heat for 5 minutes without coloring. Add carrots, celery and herbs and simmer for 2-3 minutes more – season with salt and pepper.

Stir in lentils with tomatoes and then pour the stock and heat to boil. Season with salt, pepper, and simmer at low heat for 25-30 minutes, or until the beans are tender (but not cooked to pulp). Taste the soup and season with pepper, salt and lemon juice.

Fire up the grill in your oven (max. heat), strain the cheese, place it on an oven plate and grill until golden brown. Let it cool down – minimum for 10 minutes. The cheese provides a lovely texture and saltiness to the soup. (If you do not like feta cheese, you can use ricotta, crème fraiche, or grated parmesan). The perfect companion to the soup is some grilled old bread, if you have any. Scrub the grilled bread with raw garlic and sprinkle it with olive oil.

Pour the soup into a soup bawl, sprinkle over the grilled feta, extra virgin olive oil, and fresh chopped coriander, basilica, or other herbs you that you prefer.

(Tip: Double the recipe and reheat the leftovers the next day, when it will taste even better.)

2 thoughts on “The secret master chef”