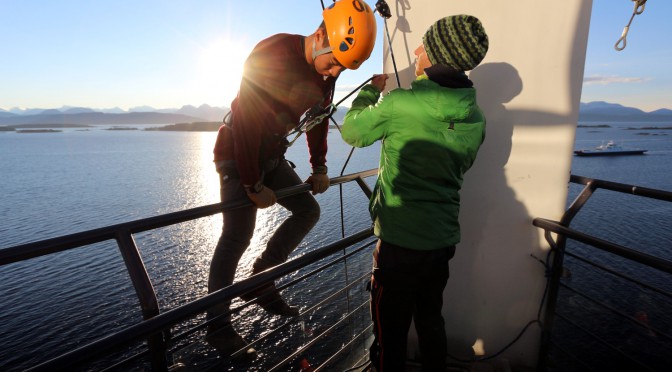 The nature surrounding Molde is the perfect playground for the adventure seeking international tourist, but the local industry has so far failed to get substantial revenues in this fast growing billion-dollar market

Former special forces soldier Didrick Ose, CEO of DID Adventure, and Høgskolen i Molde’s (HiM) associate professor Nigel Halpern is teaming up to change that.

It is a sunny Molde day for the students gathered on the balcony by the Skybar, sitting on the top of Rica Seilet Hotel. They are about to abseil 15 floors down, where they will be met by Didrick Ose. He and his company, DID Adventure, is in charge of this – for some – adrenaline pumping event, but Ose has also pushed for HiMolde to start the new course in Adventure Management which this event at Seilet is a part of.

He has already held a lecture about his business for the bachelor students on HiMolde’s Sport Event Management program, and they are all invited to check out his headquarters on an old farm bordering with Molde’s airport on Årø later on.

In the Skybar associate professor Nigel Halpern, who teaches the new course, is protected from the freezing November wind blowing out the fjord that day, but he can still enjoy the spectacular view. In his opinion the Molde region is failing to profit from having a natur well suited for international adventure tourism.

“Adventure tourism is a fast growing industry, but the industry is not so professional in Norway. We have a few hundred mostly owner operated companies that struggle to make money. That is why we have to train entrepreneurs to set up companies,” Halpern explains.

Halpern, who describes himself as a keen adventurer with a particular passion for watersports, back-country skiing and mountain biking, used to manage and train instructors in the adventure tourism industry in the UK, France and Spain. He proudly adds time spent as a ski-bum in Italy to his résumé.

“Møre og Romsdal county has a big potential for adventure tourism, so there is a huge gap in the market. In countries like the UK, the US, New Zealand, Australia and Canada, the industry is much more mature and developed. My parents wanted to rent a sailing yacht when they visited Molde, but they couldn’t find one,” Halpern says.

Internationally the total value of the industry is estimated to 263 billion dollars a year, and Halpern points out that half of all tourists now are in search of soft to hard adventures.

“Norway is well marketed abroad and a well-known destination, but today it is difficult for international tourists to find information about businesses that sell adventure activities. And I don’t count taking a bus trip to Varden as an adventure,” Halpern says.

He has comforting advice to those thinking that the possibility of bad weather scares tourists away from the region.

“Bad weather just adds to the adventure,” he says.

Didrick Ose, surrounded by students inside the DID Adventure barn house, says his customer appreciates that he is using quality equipment for his company’s activities. He has tents suited for a 150 man strong Mount Everest expedition tucked away on the wall.

“Taking proper care of expensive equipment is an important part of my job,” he tells the students.

But, he says: “I spend 90 percent of the time in my office, on the phone or computer. It’s ten thousand places to take people around here, but I got to find clients that want to go there. That’s the job.

Ose, educated in marketing and a former maritime Special Forces soldier, joined the adventure industry eight years ago and has since spent his days running and developing a profitable adventure company. He says 95 percent of his clients are Norwegian corporations, most of them renowned.

“I have focused on the corporate market, and as a result I’m busiest during spring and fall. There is a lot of marketing done abroad by the Norwegian tourist industry, but not that much selling. Where can we buy it? Who is selling these services? That is what the clients want to know. If I should sell my services internationally, I would not go for the mass-market tourists. I would have aimed at the high-end market, selling a high-end winter experience to rich English people in their 50’s. The Norwegian tourist industry is doing a terrible job when it comes to targeting and segmentation. The marketing has to be smart and targeted. Find a target group in London and talk to them,” Ose says.

According to Ose the adventure industry in Canada is 20 years in front of it’s Norwegian competition. He argues that to boost the industry locally, more well-educated entrepreneurs and instructors/guides are needed.

“Our resorts in Lofoten are ahead in attracting international tourists compared to what we see in Møre og Romsdal. We have an incredible huge and unexploited potential for adventure tourism here,” Myklebust says.

But, he points out, the tools of the adventure industry are expensive, so financial muscles are needed for those who want to invest.