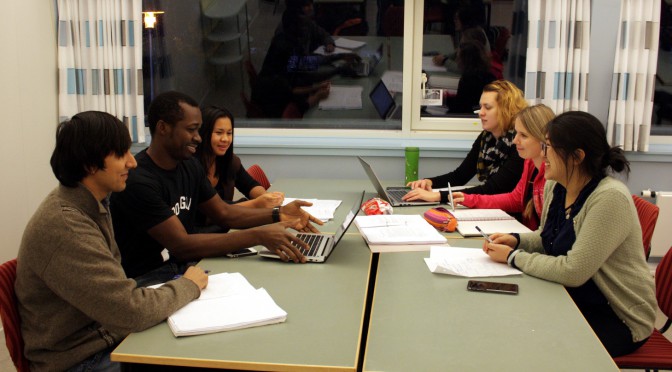 As the fall semester draws to an end, students are busy completing teamwork assignments while gaining experiences that come with mixed reaction.

Teamwork is essential in bringing together diverse people who incorporate various ideas, backgrounds and personality however, this diversity which can be in form of age, gender, nationality and educational background generates both constructive and destructive conflict around a given task.

“More brains think better than one brain. It is also part of human nature to work together, but the more diverse and heterogeneous the group is, the more difficult it may be to work and communicate amongst each other,” said Molde University College’s (MUC) rector, professor Hallgeir Gammelsæter.

The importance of working together is emphasized by the fact that human beings are part of a social construction that is dependent on each other.

As much as some have argued that group work is brain draining, teams are only as strong as they are united and as weak as they are divided, implying that teamwork is of essence in the society with obvious benefits that arise from encouraging it at educational institutions of learning.

“When I studied for my cachelors degree at this university, I did not like group work, but I learnt a lot from my experience. I am currently thinking that it is actually good, because you will never work alone in the real world,” said Kristanna Tunga Anderson, who is a master student in logistics.

Further research has proved that groups having two friends with a similar idea and a new member – who is not as close to the friends – with a unique idea, have the most productive team. The two friends knowing each other are most likely to share similar information and experiences, as opposed to the new member who will bring new ideas.

“One needs to learn to collaborate with people who are not close friends, because in real work situations it is necessary to collaborate with people from different subsidiaries or departments. It may be someone you have never met before. The need to adjust and cope with these issues by developing effective communication plans results in a good outcome,” professor Harald Dolles said.

The competences of each team member in a group may have different capabilities, but the most important thing is to figure out what are the good competences to bring to the group and the outcome at the end.

“Not all of the members are good presenters: Some might be good at computing or at making presentations and drafts, so bringing this diversity in the group also  achieves an outcome,” professor Dolles added.

“Not everybody likes group work, but one thing I have observed is that at the beginning of a task everyone is involved. But as time progresses, one person ends up doing most of the work making it one-sided. Another thing is that most of our meetings were done online, and on the internet people copy and paste a lot. This really limited how we worked,” stated Kelly Ifaka, a master student in event management.

Conflict can be destructive or constructive, but if a group is able to work through conflict the benefit may be big. Constructive conflict can be achieved when a team is eager to find solutions to answers, but destructive conflict arises when people have different opinion and do not agree to a person’s opinion. This can totally destroy team work.  If the team does not have a given direction or goal to achieve, they cannot accomplish much. But once they arrive at a goal, the problems are easier to deal with since they all know each other’s intentions.

The alternatives to ensuring smooth running of group work suggested by MUC’s professors Gammelsæter and Dolles would be to regroup people who are not getting along or by using a mediator who should be trained to re-translate what people are saying and also act as a go in between to try and reformulate questions and  concerns. Sometimes the groups cannot be changed, but if the situation is extreme and they do not get along, they can seek counselling from the course lecturer.

Professor Dolles suggested that if the teamwork is difficult, each member can write a one page individual report on how the group work proceeded and about the group members contribution to the team task, a report which can also be conducted orally. This feedback then becomes the basis for grading. If there is any problem within a group, it can be reported to him so that he can have an individual talk to figure out the solutions.