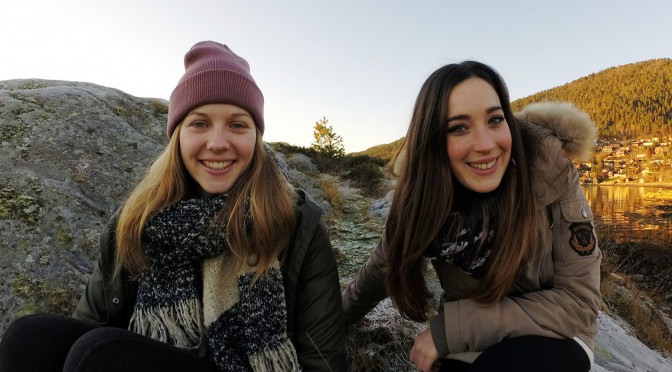 Jenka Mergaert and Lucie Ballet,  both Erasmus students at HiMolde (Molde University College),  have spent a couple of months in Norway. They love it.

Jenka comes from Kortemark in West-Flanders in Belgium and her home university is in Gent in East-Flanders where she takes a master in sport management. Lucie comes from Aix-Les-Bains in France and studies her bachelor in logistics and quality at the university in Annecy. So let’s find out what these likeable ladies think about Norway.

“Why did you choose Norway for your Exchange?”

Jenka: “Because Norway was in my list of top three countries I wanted to visit, so when I found out I could spend a semester here, the choice was obvious.”

Lucie: “I always wanted to go to a Nordic country, so when the possibility arose I took it.”

“But what is so appealing about Norway for you?”

Jenka: “The nature. And also because I study sport and here I could get some opportunities I would not get in Belgium. Like for example, as part of one of the school courses we tried abseiling down Seilet Hotel.”

Lucie: “The way of life of Scandinavian people. It is something I read a lot about. It is very different from France. “

“What are your interest?”

Jenka: “I used compete a lot in tennis in Belgium, but not anymore. Now it is travelling, a lot of jogging, bouldering, partying and still a little bit of tennis. I go a lot to festivals, like Wonderland. And I love food and cooking.”

Lucie: “I did a lot of swimming when I was younger. I love traveling and I love science. Everytime I am in a big city, I want to visit the museum of natural history. I love hiking and hanging out with friend. And  I enjoy cooking very much.”

“What can you say about food culture in Norway?”

Jenka: “The food is so expensive here and there is not so much to choose from. If you go to the store in Belgium looking for something particular, like chocolate or meat, you have hundreds and hundreds of choices. I come from a very small village and still I can find a bigger selection and better quality of products there. There are special stores for special types of food, like fish for example. One can hardly find that here. But to be honest, I eat a lot more fish in Norway than in Belgium. If I do not count the occasional hot dog from a gas station, I almost do not eat other types of meat, because it is so expensive.”

Lucie: “But to compare the situation I think that the cheapest products you can get at the stores here are of better quality than in France. There is also way more readymade food on the shelves here than in France.”

“Food in Norway is based a lot on American cuisine hot dogs and burgers.  Can you compare this to your country?”

Jenka: “Yes we have a lot of burgers, but they either come from real restaurants that specials in burgers or from fast food places which sell almost only Belgian fries called frietkot. And they serve Bicky Burger which almost everyone in Belgium loves. Every time after the party, we go out we eat at least one. It is better than burgers from Mc Donald’s.

“What is the situation with gas station food, which is very usual in Norway, in Belgium and France?”

Lucie: “You cannot get any hot food there like you can here. Maybe some sandwiches and candy. But unless it is on the highway, people almost never go there to eat.”

Jenka: “It is the same for Belgium. It is crazy that people use gas station instead of fast food stores in Norway.”

“What was the most surprising thing for you in Norway?”

Jenka: “When I arrived to Molde airport I really needed to ask about directions and I asked this elderly man. His English was really good. That was very surprising for me, I expected that he does not speak English at all and he was actually better at it than I am. Everyone in Norway has a really good level of English language; it is very different in Belgium.”

Lucie: “Every time you want to ask about something you just ask in English, assuming they speak it. In France it is much safer to ask if they speak it first. But what I find very surprising is that when I go to the swimming pool, often there is just one big female changing room where everybody changes. In France there are small separated stalls. So I was shocked about the lack of shyness of Norwegians at the beginning, but I got used to it.”

Jenka: “I was planning to go to swimming pool. But now that I have heard this, I will probably not. Also what surprised me a lot is that everyone wears their yoga pants and training clothes to school.”

Jenka: “I think it is crazy! They all look like professional athletes here!”

“What is the weirdest thing about Norway?”

Lucie: “Norwegians at parties are so friendly and talkative, but when you meet them the next day they don’t even say hi to you. Every time this happens I am very surprised.”

Jenka: “I was prepared because I was told that it is going to be like that. They are not so open, especially the youth. I have way better experiences with older Norwegians.”

“What do you think about brunost?”

Lucie: ”I tasted it at one party and I really did not expect the sweet taste. It was a good experience.”

Jenka: “I actually bought a piece and I liked it very much.”

“Lucie, compare cheeses in Norway and in France.”

Lucie: “To be honest, in Norway all of them taste like Babybel cheese.”

“What do you think about the Norwegian nature?”

Jenka: “It is amazing! I take pictures every morning from the window of my room and it is never the same.”

Lucie: “It is everywhere!”

“What do you think about Norwegian fashion?”

Jenka: “I think that everyone here is fashion minded and has very similar style.”

“What do you think about Norwegian parties?”

Lucie: “In France the party nights are Thursday and Saturday.  I noticed that Norwegians are getting drunk around 7 pm already. In France it is usually around ten or eleven.”

“What is the best thing that happened to you in Norway?”

Jenka: “I did not see it yet. I have promised myself I am not going to leave until I see it. But for me it is just the beautiful experience I have had with the Norwegian nature.”