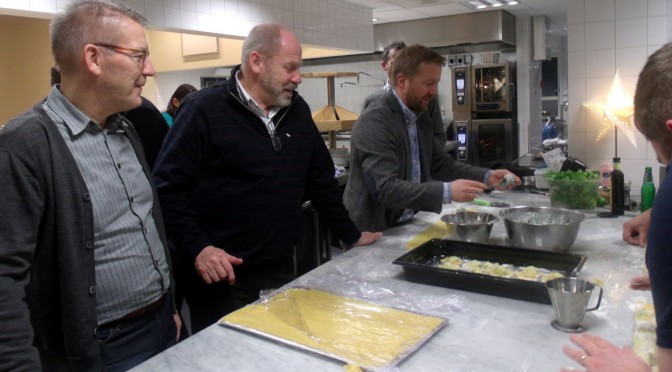 Under the supervision of master chef and PhD student Birnir Egilsson, the European Association for Sport Management (EASM) board had their culinary skills tested as they prepared dinner at Molde University College’s kitchen last night.

Ravioli, an Italian dish, was the dinner of choice at the social event after Tuesday’s EASM board meeting, which was taking place on Molde Campus for the very first time.

“The EASM conference begun at University of Groningen, Netherlands, in 1993 with six universities interested in exchanging students involved in sport management, which later grew to incorporate more universities and developed into a student seminar which follows up with a conference,” remarked Gerco van Dalfsen, who is the acting secretary general.

See more photos from the event on Panorama’s Facebook-page.

The arrival of delegates on Monday was welcomed with an unusual twist when some of the delegates were stuck in air space for 40 minutes after their plane failed to land on time, due to bad weather.

“Even though we were up in the air, we all knew that no matter what, we would still come down anyway,” said Per-Göran Fahlström, who is the EASM president.

“It is my first time here and I am quite happy so far with the progress of the event,” he continued.

MUC’s rector, professor Hallgeir Gammelsæter (EASM board member), stated that there are three board meetings a year and the conference is basically scientific, but it is also open to other practitioners. He also noted that EASM produces European Sport Management Quarterly, a scientific journal.

After a few laughs over wine and various drinks, mouth-watering dinner was served with the thought that a good company goes down well with good food.

Gaby Dijkstra, who is the EASM student representative, urged more students to participate, especially from the sport management class, given the benefits that come with it.

More information can be found on the EASM webpage.