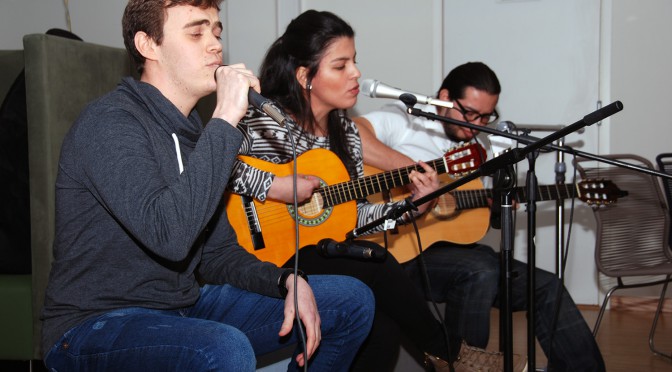 A viewing party for the final match in the African Cup of Nations occurred in the canteen on Molde Campus Sunday night. In addition to the football match, many activities were planned, such as musical chairs, a quiz, and a scavenger hunt; however, excitement came from some surprising sources as well.

The match was between Ghana and Ivory Coast. It was still tied at 0 – 0 after 90 minutes of football, so to liven things up, a group of international students had their debut show. The newly formed band is comprised of Wilson Garcia from Colombia, and Tiago Salvador and Sarah Santos from Brazil. They came up with the name “Camden Town”, referring to a section of London where Tiago and Sarah purchased a guitar over winter break travels.

Some of the songs played were ones that everyone in the room knew, such as “She Will be Loved” by Maroon 5. Most everyone in attendance was singing along. Camden Town also branched out and used their multilingual background, performing a song in Brazilian before finishing with another crowd-pleaser: “I’m Yours” by Jason Mraz.

After the great performance that had everyone forgetting about the uneventful match, a glance at the television showed that the teams were still scoreless and soon heading into the dreaded penalty shootout. When the referee finally blew the whistle, people were thinking that there were no last minute heroics to be had. And those people were all quite wrong.

Ghana took a quick 2 – 0 lead in the shootout, then Ivory Coast rallied to 2 – 2. After that, an absolutely ridiculous slew of 12 straight goals had the score still deadlocked, this time at 8 – 8. The only onlookers not on the edge of their seats were the ones on their knees in disbelief. Each team had only their keeper remaining in the lineup, causing the two goalies to face off in penalties. Boubacar Barry from Ivory Coast got the best of the Ghanaian keeper Brimah Razak in one of the most epic endings the African Cup of Nations has ever seen.

It’s safe to say the viewing party event was a success.