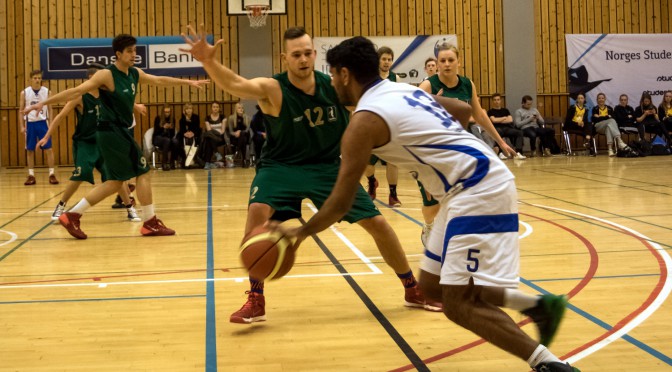 HiM basketball team (in green) surprised themselves with their performance when beating BI Lions 39-28 Friday. Photo: Vaclav Slimacek

A team of eight basketball players from Molde University College who had never trained before defied all odds and made it to the final at the ongoing student’s sports championship Studentlekene 2015 in Trondheim.

Høgskolen i Molde (HiM) basketball team – with only one female member, Henriette Goksøyr – began practicing on Wednesday, a day before the games kicked off, surprising even themselves with their performance after beating BI Lions 39-28 Friday evening. “We can’t really believe it. After winning the first game we hardly expected to get this far, but ended up undefeated after four matches,” said Goksøyr.

More photos from the semifinale on Panoramas Facebook-page.

Five of their team mates had never played a game before, but relied on the expertise of the three experienced mates who trained them on a few basics such as  lay ups and various techniques that had them crashing their opponents. The reason behind their late practice was because they were not residing in Molde at the same time. “Some of us were on our internships in various locations and we had signed up for the games towards the end of the deadline,” a joyful Goksyør claimed.

Practice does make perfect, but this team has proven otherwise. They will be facing NTNUI Nerds at 14:15 in the final Saturday.

A blistering Mads  Århus  Fjeldstad sealed a surprise goal for the Molde students’ futsal team in the quarterfinal match against NMBUI and took the Molde team to the semis with a 1-0 score. The  MSI team managed to make it to the semi-finals with a little bit of luck as the team they played against were pretty good, recalled Alla Abdallah, a Sports Management bachelor’s student and footballer who put the team together.

“We had a selection process before Christmas last year which saw around 36 players at the first try out who were narrowed down to 20 and eventually 12 players,” said Abdallah.

The team begun practicing in January and have had five training sessions. They will play their semi-final match against Valkyrien (Sjøkrigsskolen) at 11:30 Saturday.