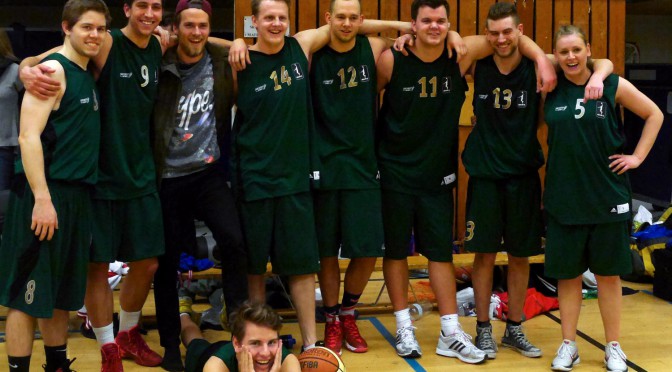 Molde students were among the top sports teams in Studentlekene, taking home basketball silver and fourth place in the men’s futsal competition.

Speeches, awards and entertainment marked the end of a sporty and busy weekend at the just concluded 2015 students games in Trondheim.

Close to 2500 students from all over Norway participated in 18 sports categories organized by Studentlekene 2015, with a representation from Molde University College’s sports teams who featured in basketball, football, handball, volleyball, tennis, squash and table tennis.

READ MORE: MUC sports teams made it to finals

The Basketball team HIM came close to winning, but comfortably settled in second place after losing to NTNUI Nerds 58-36, a well-deserved position even though they began training a day before the games kicked off.

MUC’s futsal team MSI made it to the semi-finals, but lost to Valkyrien (Sjøkrigsskolen) at the last few minutes with a 2-0 loss.

“We were held to a 0-0 draw until the final minutes. When they scored their first goal, we begun defending and as a result, they scored one more goal giving them a clear lead,” said Alla Abdallah, who was one of the players.

In the third place playoff against NTNUI the Molde futsal team lost 3-2, and ended up as number four among the 26 competing teams.

The other sports categories from MUC did not fair very well, but their participation was commendable. “We won one game and lost two, but it was so much fun,” said Tarek Nader who was playing in Molde’s ÆØÅ basketball team.

After the games, a banquet was held on Saturday evening as participants were hosted in two of the largest hotels in Trondheim city for dinner and entertainment. “It was so packed, that they had to separate us, but both places were equally filled up,” said Pavla Ujmiakova, a Panorama photographer who played in the basketball team ÆØÅ.

Scandic Lerkendal Hotel hosted around 1800 students as Robin og Bugge and DJ Pumba entertained participants, while the handball team were hosted at  Clarion & Congress Hotel as  «elake elake» and «Bongo Drum,» as well as an acrobatic group AkroRock entertained the guests during dinner with an exuberant couples dance and acrobatics.

“The banquet was okay. We were so tired after dinner that some of us went back to our places pretty early, but the rest went to the after party in town,” continued Ujmiakova.