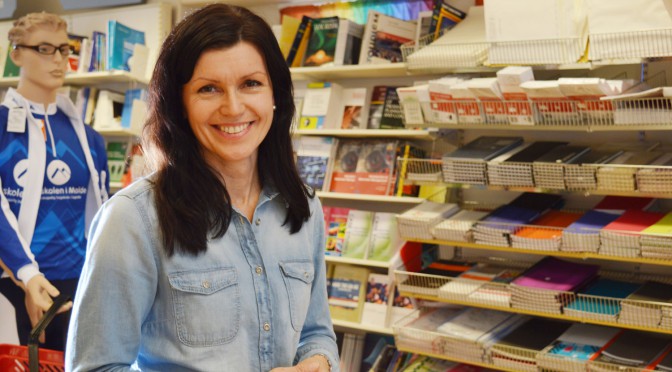 If you regularly shop at Molde University College’s bookstore, chances are that you may have probably noticed a new face.

After twenty nine years as the university college’s bookstore manager, Fredrik Tande Bjordal finally departs at the end of this month leaving Marit Mahle (43) to take over his long held job. On spending a few minutes watching her work and interact with various people coming in and out of the shop, one can clearly see the enthusiasm that comes along with her work ethic.

“I am from Molde and have lived in this city for most of my life,” she said. Coming from Norway’s city of roses, it nearly comes as no surprise that the mother of two has a vast experience in tending flowers. After graduating as a florist in 1994 she has worked in flower shops. In 1999 she moved from back to Molde from Lillehammer and has worked at the garden centre Plantasjen since then, the last four years as manager.

Her transition from flowers to books came when she decided to further her education and study for a course in economics at the university college, not knowing that her career path would change by that slight decision. “There was a job vacancy announcement which I applied for and became the favourable person.” Having secured the job, she decided to give studies a break and focus on managing SiMolde Bok.

The mother of two is also a handball trainer for children within the 10-year old age bracket at Træffhuset. She has an ear for good music particular Wham, which dates back to the 80’s and goes ahead to give an example of George Michael’s music which fascinates her but also states that she is a fan of the radio music played on NRK P1. When it comes to delicacies, her love for Norwegian dishes is undeniable. “And tacos. I eat pretty much everything,” she said.

Unlike her predecessor, who is said to have read many books and knows nearly everything about books, Marit confesses that she loves reading fact books, but states that she has not had time to read any book since she begun working.

When it comes to plans for the bookstore, she hopes that students would make a point of collaborating with her so that she can place orders for them and the bookstore becomes their main and only source of buying books. Marit believes that the new book ordering system that she soon will put to use can speed up the delivery time to Molde customers dramatically by integrating the stores in the Campusbok chain more closely.

If she were to change one thing in the world, it would be to have more handball games and had she been an animal she would have been a cat given its nature to be free. “It also likes to be rubbed the right way,” she said.