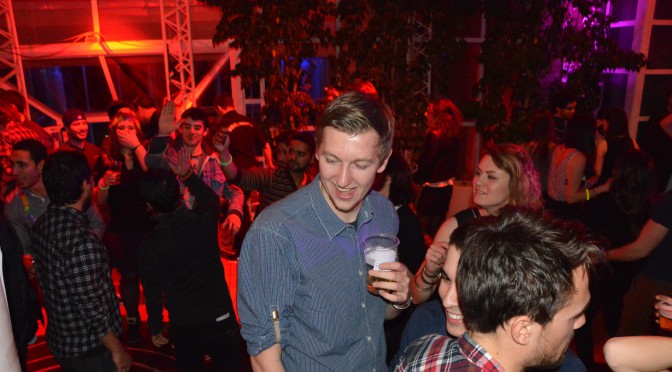 A combination of cheap beer, good music, beautiful ladies and well-dressed gentlemen would definitely guarantee an exceptional party, as was the case on Saturday night at Molde University College.

The new student nightclub iSmuget officially opened on the same night at the biggest party ever witnessed at MUC, under the name House Party, was hosted by all student organizations on campus. Each organization had its own bar stand. Even though there were no major incidents to report about, every bar had interesting events taking place at the same time that could not go unmentioned.

Karriereforum: This student organization’s main role is to connect students with employees and companies. They had the most attractive bar with a relaxed vacation based theme. It was earlier believed that the ladies were to serve beer in coconut made bikinis which would have been a perfect marketing strategy, but they appeared dressed in labeled t-shirts instead. “The idea of our theme is for students to come and relax as we serve them beer and tell them more about our organization,” said Michela Sala, Karriereforum’s leader. Their main activity was a game called hula hoop. Participants walked away with a hoop and their name was then inscribed on a public board which was close to their bar.

Erasmus Student Network:  The organization caters for international and exchange students. Their main activity was a game called piñata. This fun game involves a blindfold, and a pony like doll that is stashed with candy and loosely hanged somewhere. A blindfolded player picked by a lottery raffle uses senses to swing a bat towards the direction of the piñata, hitting it hard until it breaks, then wins the fallen candy. The game was cancelled later in the night due to security reasons. “They could not risk having drunk students running around with a bat so they had to cancel the game at the last minute,” said Nitherson Marvin from iStudent, who was in charge of overall planning of the event. This information was not communicated to most students who eagerly waited all night long for the DJ to make announcements about the game, in vain. “Since the activity was cancelled and we had already stashed the piñata with candy, we shall plan another event to break the piñata,” said Luiza Oancea, ESN Molde President.

Logistikkforum:  This student body had their logistics well managed, making use of the services of three pupils from Molde videregående skole who did an exceptional job in serving drinks to their clients all night long. Attempts to reach some of the leaders from the forum during the night was futile, but their choice of staff was good since they made a good amount of beer sales. Apart from beer sales, they did not have any activities planned. It must be noted that the pupils were above 18 years old, the legal age to consume or handle alcoholic beverages.

See more photos from the party on Panoramas Facebook-page.

Start HIM: The organization promotes innovation and an entrepreneurial mindset among students at MUC. Their slogan was “You got to risk it, to get the bizkit”. Their activity was a game of cards. To earn the biscuit, participants had to risk it by playing one round of cards in order to win the special prize, a biscuit. Since setting up and running businesses is associated with taking chances, taking a chance to play the card game was seen as an example of a risk taken in the business world. The event took place in a peaceful and relaxed atmosphere.

MSI (Moldestudentenes Idrettslag): The student’s sports organization organized two casual fun games, beer-pong and table tennis in the canteen. They got more visitors than expected and as a result, nearly every beer pong ended up breaking. It was a fun and very engaging session.  “We chose these two games because we wanted something casual and fun. Beer-pong is an absolute classic at parties with a sort of sport component to it,” said Knut Hofgaard Eikre from MSI.

iStudent: The mother of all organizations did not have a stand since they played a key role in organizing the entire party. A movie from the Winter Week on Oppdal this year, presented by Henrik Eldevik Bortheim, was shown on a big screen at the canteen and watched by a large number of happy students.