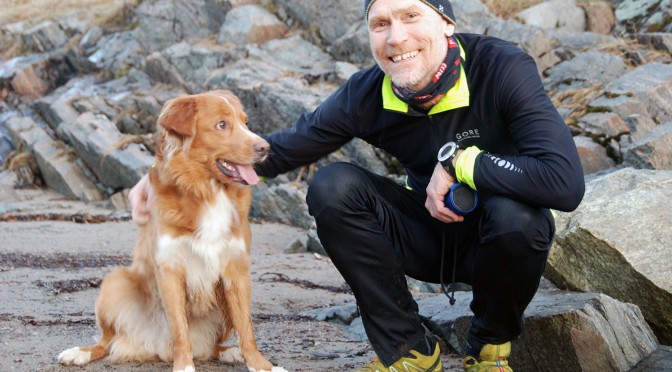 Two dogs are the stars of this article. One of them is Lucas, a Tsvetnaya Bolonka breed that weights 3,5 kilograms. Lucas is owned by HiMolde special advisor Randi Gammelsæter, who is married to HiMolde-rector Hallgeir Gammelsæter.  The other one is Hampus, a Nova Scotia Duck Tolling Retriever. This breed is used for hunting goose and ducks. Hampus is owned by HiMolde associate professor Steinar Kristoffersen.

Why did you chose to have a dog and not another domestic animal?

Randi: A dog is something different, because it is more dependent on you. You have to take it for walks. A cat walks its own way. A dog becomes a part of the family.

Steinar: Actually, I do have a cat as well. My wife had a dog as a child. So, primarily that interest of her and my daughter led us to raising a dog. Dogs are always ready to protect the family and loyal, apparently ready to die for the family and not selfish except when it comes to food. Even if it might not be the right word to use, they have an unconditional love for the family. They are also very happy. Hampus is like a mirror, he returns back everything I give in the same way. If I am good to him, he also is good to me. I could generally say that dogs make you happy.

I see many Norwegians with dogs. Why do you think you came to have such a practice?

Randi: Most Norwegians are quite well off and the economy allows them to do almost everything. They can do things only for pleasure. Owning a dog for a companionship is one of those things. In other countries, you may own a dog to guard a house. Here we do not need someone to do that. We feel safe. We raise a dog primarily for the companionship.

Steinar: I could say the history probably started in relation to the hunting tradition and the domestication of hunting dogs. Secondly, people living very remotely and lonely, especially those in the mountains, needed companionship. Those owning a farm also needed protection for their livestock and information from a barking dog when someone approached the farm.

How do you characterize a dog in the Norwegian culture?

Randi: We say it is a man’s best friend. Dogs are very trustful. They will do everything for the owner. That is our thinking.

Have you ever brought it to office or took it with you in a long travel? If it has to pee, would not that be difficult to handle?

Randi: My dog never pees inside. It is about educating the dog to get good routines. When he is taken out from home three or four times in a day, he understands that peeing should be done outside. He is educated to do several commands –sitting, stopping and laying down.

Steinar: Yes I did. It is not difficult, because he will wait and will not pee anywhere. I have trained him. As I take him out every morning at 6:30, he understands that this is his time to do stuff like that.

How much time do you spend with the dog and what do you do in those times?

Randi: I take him for15 minutes of walking every morning and a longer walk of 45 minutes in the evening. Brushing his fur takes me 15 minutes a day and a bit longer in the weekends, where I give him a shower before the brush. When we are at home, he spends most of his time sleeping on the couch or my lap, where he likes to be.

Steinar: When we are not around, he goes to bed in a cage. That is his house, where he feels safe. He lies down calmly and waits for the next thing to happen. When we are around, we take him out for a walk and running. We spend a total of one hour a day in weekdays; a walk before breakfast and in the evening with me, and with my daughter after school. In the weekends, we go for much longer runs and walks. Besides, because he is a search dog, we play hide and seek when the situations allows for it by letting him find mushrooms which is hard to find and things hidden and buried in the snow.

Is there something you could mention as a funny or tragic episode that has happened in relation to your dog?

Randi: He has had many health problems and once he experienced an allergic reaction to a vaccination against a tick infection. The allergic reaction stayed long and there was no cure. The veterinarians could not help, even concluded that he probably would not live very long. But after six months, Lucas gradually became well again. That period was worrying to me.

Do your dogs express emotions?

Randi:  Of course, even if I am not sure how many emotions he is able to express. When I come with a food for him, he expresses his happiness waggling. When encountered by a big dog, he expresses fear and barks to show his anger.

Steinar: Yes, definitively. If Hampus is happy, his whole body will be dancing all day long. In cases where I go skiing alone, he becomes disappointed and bored.

Which character of your dog do you like most?

Randi: The happiness when he sees me on my return to home from office. I admire Lucas’ ability to be present in the moment, just now. He is not stressful. He does not worry about tomorrow. He is always happy. My dog sings when my daughter plays the piano at home. This is probably not unique for Lucas, but it is very cute.

Steinar: He does not give up. Even if he may feel tired on long trip or run, he never runs away. He is loyal to the project and happy to come along. Dogs are quite predictable indeed and Hampus is a nice fellow. One thing I would say unique about my dog is the tolling he does to ducks; playing, tricking and fooling them to swim closer to him.

Hear Lucas howl in this video:

Is keeping a dog costly?

Randi: I use much money Lucas and I do not want to think about it. The food is not expensive for a small dog like him; I spend around 200 kroner per month. When we bought it, we paid 15.000 kroner. For vaccinations and insurance, I spend around 10.000 kroner a year.

Steinar: It was expensive to buy Hampus, but keeping a healthy dog costs nothing except for the food it eats. Hampus eats 320 grams twice a day. I spend 50 kroner for that, which is 1500 kroner a month. He is always hungry though, if he gets the opportunity. I am the one who adjusts the feeding schedule for him.

Does dogs have favorite foods like we humans do?

Randi: He does not like everything. He prefers wet foods and even human foods. I tried different kinds of foods before I came to know this.

Steinar: Yes. He prefers one brand. He also likes pasta with creams sauce, salmon and meat. When we go for a trip, I give him my food. However, if he adapts this sharing, he will sit next to me and beg for my food the next time around, and that is annoying.

Is there funeral events for dogs in Norway?

Randi: It probably is in the US, but dog funerals is not normal in Norway. Even if it is not common, some practice burning the corpse and dispersing the dust on the owner’s compound.

Which word best explains your dog?