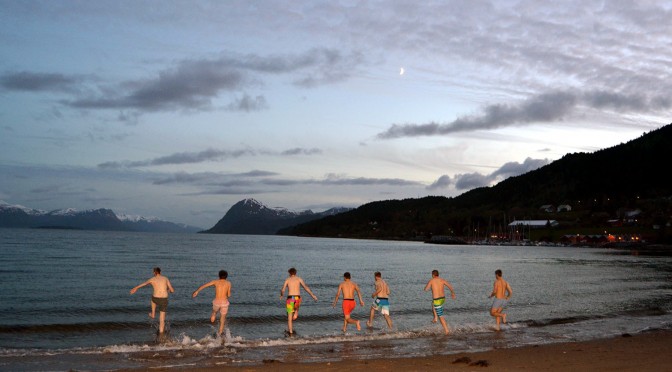 Midnight swimming at Kringstadbukta, the beach next to campus. Photo: Sarah Santos

The Saturday evening in Molde, the evening when parties happen. The only day when it is possible to party in this small town.

Students gathered to celebrate birthday of Hugo and Diane. Cake, fire, candles, birthday songs in English and French, beer, vine, vodka and some snacks, presents and hugs, everything was there. Some people left for town in hope to find a full bar and get some dancing going. Others stayed in campus to enjoy a beer and chill because it was the last few days in Molde before moving to home countries all around the World.

Just after the beer was opened, someone had the great idea to swim in the fjord. As the pressure of leaving in few days raised someone said: “Come on, it is the last chance we have to do this.”

Of course the peer pressure of the group kicked in and from one enthusiastic individual suddenly a group of eager swimmers was formed. The guys needed only few minutes to change to swimming shorts. One even got his flip flops on. After all they were going to the beach. In four degrees!

The water was not much colder that the air, I presume. The group got to the beach. Great feeling of the North hit, when it felt like noon while it was actually midnight. The moon and the sun shined at the same time.

The girls provided moral support from the beach to give the boys more power while they tried to get warmer by running back and forth. They ran in as fast as they could and screamed as the cold hit them. It was not a surprise that they ran right back to the cold air towards the towels.

The voice of the first swimming pioneer from the campus room got alive again and screamed: “Let’s do it again.”