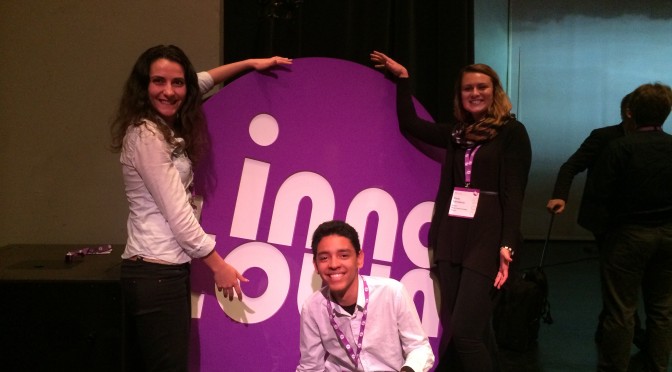 The annual business innovation conference InnoTown took place in Ålesund 20-21. of May. This conference aims to bring world class speakers, motivators and entrepreneurs to move minds and business.

This year’s InnoTown featured eight speeches which were visited by over 420 participants. Considering that a registration fee was over 13 000 NOK and the large amount of spectators the quality of the event is undisputable. A group of three international students from HiMolde took advantage of a sponsorship program by Rolls-Royce and HiMolde which resulted in a price of just 500 NOK for them.

“The level of the speeches was great. I would say the same or better than TED Talks usually are,” said Pavla Ujmiakova one of the visiting HiMolde students.

The topics of the speeches varied but amongst the most outstanding were the “Using Technology as A Catalyst for Change” by  Jack  Andraka from Maryland, USA., who developed early detection non-invasive test for pancreatic cancer which is cheap as well. He accomplished this invention before the age of 16.

Or «How Beauty feels» by Richard Seymour who is an accomplished designer with clients such as Samsung, Ford and so on, and who recently works on a project of a hotel establishment floating in the air.

The conference was handled professionally with well-prepared entertainment program for the attendees.  Due to poor promotion on HiMolde the opportunity to visit cheaply was used by only so few students.  But since this event takes place annually and Himolde could benefit from its merit, it should show a bigger presence next year.