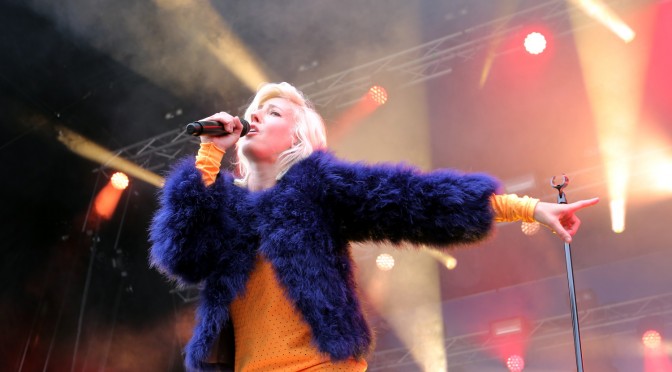 Veronica Maggio at the beginning of her performance. Photo: Krystof Diatka

This time sunny, the Romsdal Museum welcomed another day of Moldejazz. The highlight of this day’s line up was Veronica Maggio and D’Angelo and The Vanguard.

The blonde Swedish superstar came on stage Friday evening with the message of cheerful pop music and proved how large of significance she consumes in Scandinavia by forming a crowd as large as Robert Plant did the other day. Perhaps because of the linguistic resemblance of Swedish and Norwegian, perhaps because of the Scandinavian togetherness or perhaps because her music is merely more mainstream and relevant, Veronica Maggio raised the crowd to its toes faster and higher than Plant could have dreamed of. A really surprising sight for a non-Norwegian and non-Scandinavian viewer like me.

The pleasant and charming  voice of Veronica Maggio fascinated even a pop culture hater such as myself. Even though I did not agree with the general loveful and overjoyed vibe of the music and that I did not understand the lyrics, I got to admit that it had a certain impact on me. I just felt generally happy. Like the harmony of the accompanying band and the harmonic singers voice came together and created an ideal pop show consumable by even more indifferent public. The whole picture was spoiled a little by volume being set too low on singers microphone. Maggio is, of course, not to blame for that.

After the encore of Veronica Maggio was over, the atmosphere went more solid as the audience started expecting arrival of the next large name on the Moldejazz’slineup. D’Angelo is notorious for his delayed concert beginnings. Therefore the crowd braced itself for a time of empty stage and boredom. It was broken fairly quickly.  The leader of the Jazzmolde Hans-Olav Solli climbed on the stage and delivered the dreadful message that due to D’Angelos sickness his concert was cancelled.

Resentment of the crowd went of course in vain since no one was to blame. Moldejazz is refunding half of the ticket price to the Maggio and D’Angelo concert. If this blow is going to significantly influence future years of the festival is left for discussion. But since it is no secret that Moldejazz already underwent certain financial struggles, one might conclude that this drawback is not going to pass smoothly.