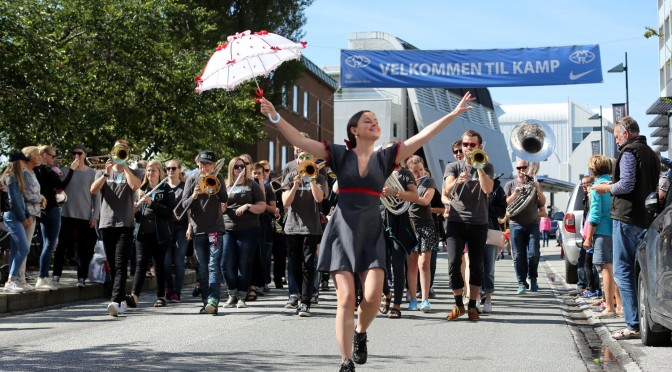 Every day at Moldejazz the day kicks off with a parade, which has become a traditional and inseparable part of the festival.

The crowd lines up both sides of the street every time the parade passes. It is formed by the marching band Jazzlogen and the dancers of Molde kulturskole, and every day it predicts chilled and easygoing atmosphere at the festival. When you see the parade approaching, the first you notice is a an attractive female figure skillfully performing swing jazzy dancing moves. It is a 21 year old Jeanett Holsbøvåg,  one of the most famous dancers of Molde. She claims that when people see her around Molde they mostly say» Oh, look! It is the dancing girl.»

– I am taking courses in math, chemistry and physics in Oslo where I live with my boyfriend now. But of course I need to be in Molde for the festival.

– How many years have you been with the festival ?

– This is the tenth year I am involved with the festival.

– How did your dancing career start ?

– I started dancing when I was three years old. My mother, who was a Norwegian champion,  started training me. Later on I joined the Molde Swing- og Rockeklubb and I danced ever since. I started competing on Norwegian level when I was eleven, but I couldnt start competing internationally until I was thirteen.

– What is your dancing speciality ?

– My speciality is Boogie Woogie style in which I have been competing for nine years.

– Did you have any problems during your dancing career?

– In 2012 I had a lot problems with my foot caused by a lot of training I underwent when I was young. I had to have two surgeries and had to take a break up until pretty much now. I love dancing, so I am happy that I can do it again. Two years are a long break when you dance your whole life.

– What are your biggest dancing accomplishments?

– My dancing partner  Mathias M. Rydjørd and I won the World championship in Boogie Woogie in 2008 and 2009. We were Norwegian champions for eight years and Nordic champions for two years.

– What does dancing mean to you ?

– Two years ago I would say everything. But the brake made me realize that there are more important things in life. It is still a big part of me, but I realized it is not all. I found out that I have a lot of other things that mean something, like friends, family and school which are the most important thing now, and dancing is right after them.

– What does Moldejazz mean to you ?

– It means a whole lot for me. Molde is not a big city, but I feel that during the festival everyone famous is here and you get to meet them. There are a lot of fantastic people who come together to make the festival what it is. It creates a great atmosphere. Molde would not be the same without the festival.

– Could you recall any time when something went wrong with the parade?

– I would not say that anything went wrong. But the parade the day after the shooting took place at Utøya in 2011 was really special. We didn’t play music and we didn’t dance. We did the parade to honor the victims of Anders B. Breivik. Everybody cried and I had to try really hard  not to. It was a rough day  and the saddest parade we ever had.