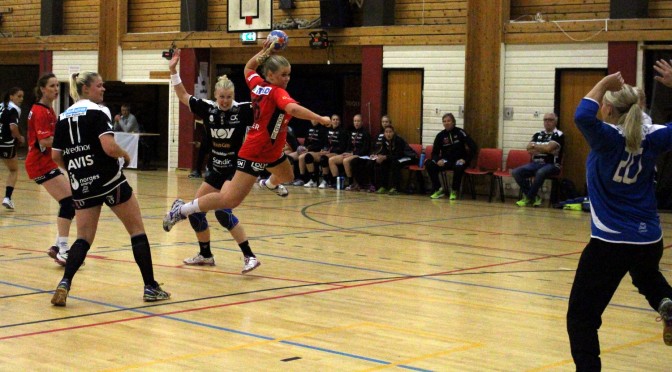 GRADING GAMES. Molde Elite – Molde Handball Club top women’s team – have been promoted to the premiere Norwegian handball league following a successful season last year. For my continuing coverage of the home games, this new recurring segment will contain my opinions on how each match went.

The opening match against Vipers Kristiansand last Sunday was a close one. Molde was quite aggressive in the first half, with a patient but physical brand of offense. This was critical both for producing multiple penalty shots and also for requiring the opposing defense to double team against the attacks. They were able to trade score for score in their debut at this higher level of competition.

Troubles started to come when the score was tied at 14 with less than a minute before halftime, and Molde had possession. They chose to shoot too early here, and the shot was saved, allowing the visitors from Kristiansand to run it back and take the lead in the last 15 seconds.

The second half began with a 5 / 2 run for Kristiansand. They had substituted in a new keeper who managed multiple blocked shots over this period. Though Molde resumed matching score for score after the slow start to the half, they were never able to catch up on those three goals.

Star player #10 Anniken Obaidli noted that, «The problem was energy. In the first we went two on two. That creates space for others. In the second, we were only one on one, and that makes worse shots.»

Despite the loss, Molde Elite showed much talent and promise. More importantly, they showed a packed house of around 500 spectators that they are indeed a competitive team at their new division level.