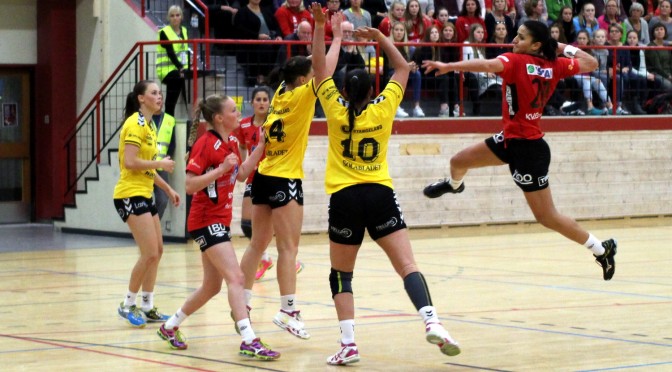 One of many power shots this night by #20 Ines Khouildi. Photo: Matt Lunn

Things got heated in Idrettens Hus for this match. The yellow cards were flying all night, including both teams having a coach receive one for furious responses to referee decisions.

GRADING GAMES. Despite occasional defensive miscues, Molde Elite held their opponents to 12 scores each half in this rough, physical Wednesday night game. That is an easily sufficient defensive production to win the match if Molde could score efficiently through the match; however, their offense was quite streaky. The first half was full of decent openings leading to no score. In fact, a whopping seven shots by the Elite rebounded off the bar in the first 20 minutes alone!

#20 Ines Khouildi explained this after the match:

«We were trying too hard. Trying to be too good, shooting for perfect shots.»

The girls turned full circle in the finishing category after halftime. In particular, #20 Ines Khouildi increased her scoring percentage significantly, with her standard cannonball-style shots starting to feel at home in the back of the net, and she finished with nine scores.

Though this offensive turnaround allowed Molde to tie the game multiple times in the second half, they were never once able to take the lead. Sola, leading by a score in the closing minutes, received a two-minute penalty that lasted for the rest of the game. Molde was unable to capitalize in their final attack as steady keeper #1 Kimberly Bleivik managed yet another blocked shot.

Sola player #10 Sherin Obaidli, playing against her two sisters Mona and Anniken on the Molde team, commented on the critical moments in the match such as that final play.

«When we really needed a goal, or a stop, we stood up together as a team.»

With that comment, she unknowingly pointed out the one X-factor that Molde Elite is missing, which they need to find in hard-fought matches such as this one.