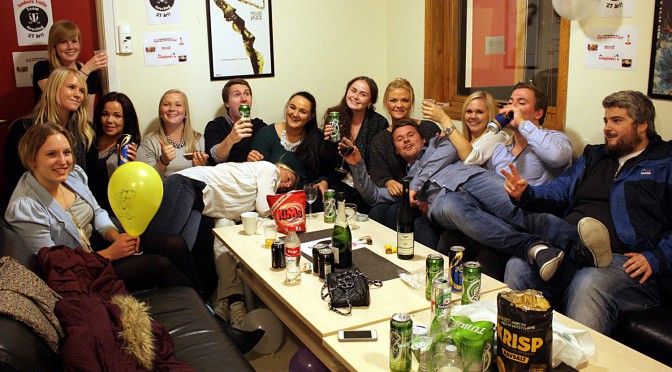 Besides stress from exams, boredom in classes and never ending financial struggles, partying has always been an inseparable part of student life. Needless to say, in Norway this segment is a little bit more problematic than in other countries.

Clubs, bars, pubs and such usually offer an infrastructure which prevents the non-partying public from all the noise and other disturbances of social gatherings. However, those establishments are by law  required to close at certain times. Therefore the only option is to organize a nachspiel on private premises. Those do not prevent other people from the disturbance. And since Norwegians by nature are reserved and shy people (when sober),  nachspiels often leads to unnecesarry security  and police interventions that you and I have witnessed so many times.

Students are of course no exception to this and their hunger for party is even larger than among the general public. Many of them reside at student dorms, so naturally they move the party there. Student dorms at Molde University College used to be equipped for this option.  Kvam used to have a common room. Rimo had one too. Rimo is not a student dorm anymore and Kvam’s common room has been refurbished into a laundry room. And because Campus was built without it, the only one was left at Glombo. It was vastly used by many students on all kinds of occasions.

Tapio Stensletten, a Glombo residing student, described it like this:

«We had a lot of vorspiels and there were nachspiels every now and then on the weekends.»

This all went up until March 2015 when SiMolde locked the room down. The official reason for that was a number of complaints by other tenants living at Glombo. The key could be borrowed out on the signature of a specific students who took responsibility for eventual damages and cleaning up.

«That way we could have more control over the usage of the room and we could be sure that it gets cleaned up,» said Venke Hovde – the head of student housing at SiMolde.

But aparently this agreement does not cover any sort of event.

«I have had the key for the room and the responsibility for it during Opening Week this semester, but they took it away when they found out we were planning a large party,» said Tapio Stensletten.

Obviously, it takes a lot more to keep students from partying than locking the common room. According to Tapio Stensletten the parties has just moved to private rooms.  Logically one would expect that this would mean more damage to the property and even more disturbance, since the common room does not share walls with almost any living quarters.

But Venke Hovde has a different oppinion.

«It is better if they hold the parties at their own rooms, because that way we can more easily track down  who was responsible for potential problems or damage and have a discussion with them. It was not possible when the common room was open for anyone all the time.»

Even though arguments of both side are understandable, the current state of things is not satisfactory.  Going out and partying is not just a hobby and part of the university experience, but also an important socializing mechanism. So some sort of compromise should be reached and the only common room at college dorms in Molde should be accesible to students in one way or another. The students have the will for compromise.

«We are trying to get the common room opened again,» added Tapio Stensletten.