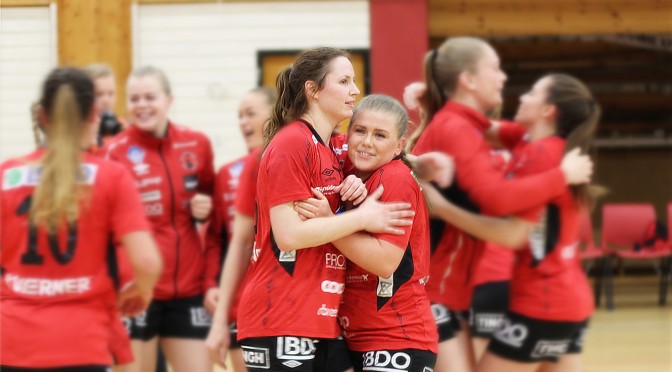 As the only man cheering in his entire section, this Molde HK superfan had to create all the noise himself.

GRADING GAMES. He took his seat looking more like a premier league fan walking into Old Trafford to see his reds play. Luckily for him, the Molde Elite was finally able to deliver the kind of performance that will make a superfan like this one go crazy.

Everything started right for the Elite, and they carried the early momentum until the final buzzer. After six minutes of play, Molde was already up 5/1 from a combination of generating turnovers and capitalizing on the opportunities.

The only strategy that wasn’t working was shooting over the central defenders. This is a typical move for #20 Ines Khouildi and her cannon of an arm, who didn’t manage her first goal until the 22nd minute. Her low success rate was later explained by #26 Emilie Hovden:

«This team played tighter to the middle and gave more space at the edges on defense. Space for wings like me».

Molde’s halftime lead was 15/9, but it would only get better when the second half commenced. The lead grew as large as 11 at one point in the game, largely due to defensive success.

Rælingen often had to settle for mediocre shot opportunities, which gave goalkeeper #21 Petra Blazek her chance to shine. She provided countless individual saves, including a miraculous double-save, to solidify the lead and create fast break opportunities for her offense.

When asked what went into her MVP goalkeeping performance, Petra Blazek broke down the strategy between her and her defense:

«We couldn’t stop #7 from scoring. We had to focus on stopping everyone else; their top goalscorer can’t win a match scoring goals alone.»

While Rælingen #7 Andrea Hanssen did account for 7 goals, her team managed a total of only 22. Molde’s 30 goals gave them 2 points on the table that they desperately needed. The win moves Molde from last place to 10th and  currently out of the relegation zone.