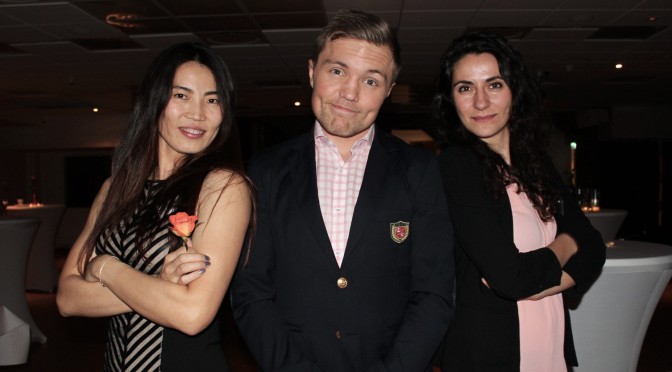 From left: Kristanna Anderson, Ole Martin B. Mundal and Luiza Oancea are HiMolde students who are expecting to graduate in 2016. Photo: Jocelyn G. Taknæs

Most 2016 graduates of HiMolde still do not know where they will be later this year.

The recent career week at HiMolde has many students realizing how soon graduation will be upon them. The bachelor’s and master’s students that are in their final year have been struggling to solidify their plans after graduation. What do they intend to do in this turbulent Norwegian job market? Or will they go somewhere else?

Before the career week, Ole Martin had begun his job search and has already been called in for an interview with a firm in his hometown of Kristiansund. He described the current sentiments of employers:

«They would be more than happy to employ more people, especially students, but since there is so much uncertainty in the job market, they can’t say when or even how many they will employ.»

Since the job market in Norway is getting harder to crack into, Ole Martin believes it might be smarter to take a master’s degree. However, he is not sure about what he will do after graduation because everything is in constant flux right now. If one of the companies offers him a job, he would consider beginning to work. Otherwise, he will probably either start a master’s degree in Norway or take a part time job until starting a master’s degree in Australia. In the long term, Ole still wants to work in Norway and travel outside Norway and Scandinavia.

Bich is hoping to stay in Norway if possible.

«The biggest difficulty is that many industrial sectors are firing employees due to the bad economic situation. And the language is an invisible barrier between Norwegian and international people. My Norwegian is not good enough. But I will keep trying to find a job here. If I cannot, I have to go back to motherland,» Bich said.

This student has a more optimistic view of the job market, and she advises job-seekers to keep their faith; from her point of view, although Norway has been experiencing a tough time in its job market, there are still jobs out there.

They are available on websites. The important thing is you need to have enough determination to search for jobs, put efforts toward having a good CV, and be able to clearly explain how you can contribute to companies.

For herself, she still has a strong hope to get a job in Norway because she knows her advantages. She speaks Norwegian, she has extra CV material from her work with ESN, and she has a good education. Above all, Luiza has passion. She wishes to find a job within Møre og Romsdal to be close to her fiancé. She has already applied with companies in Molde, where she would prefer to stay, and plans to keep in touch with them.