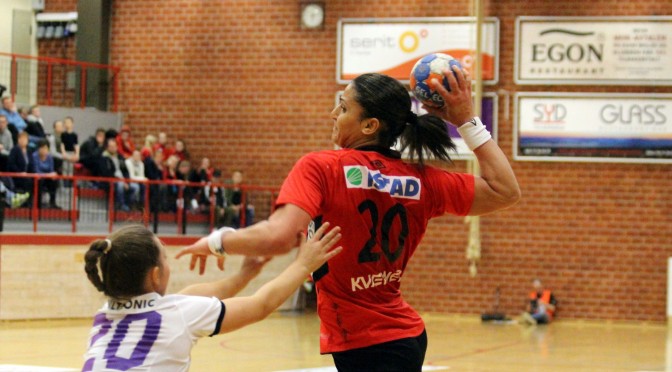 Glassverket, currently in third place in the table, provided quite a struggle for the home squad on a night where Anniken Obaidli was unable to play due to her shoulder injury.

GRADING GAMES. The opening minutes of the game made it appear as if Molde would get along fine without Anniken Obaidli and her sister Mona, both of whom are usually starters. Early turnover creation allowed for fast break offense, and Emilie Hovden was always ready to capitalize. The Elite’s early lead was as large as 9 – 5 at one point, with Hovden having scored the bulk of these goals.

After the hot start in the first half, the offense lost their identity a bit. Without the fast break offense, the Elite struggled to find shot openings. Turnovers became more of a problem then; Tine Rustad Albertsen in particular had troubles passing through Glassverket’s tall defensive line. Another noteworthy point to mention was this match’s complete lack of two-minute penalties. While June Andenæs did knock a couple of girls on their butts, the overall physicality and aggressiveness was somewhat lacking.

The second half picked up right where the first half left off. Despite many blocked shots, Molde’s defense seemed unable to prevent Glassverket from scoring second-chance goals. The offense also struggled, with just 9 scores in the second half. The Elite made only half of their penalty shot attempts, which is an area where Anniken Obaidli was sorely missed.

Isabel Blanco, the latest addition to the team, commented on how Molde lost the momentum that they started the match with:

«We were aggressive in the first 25 minutes. We ran back well on defense. Glassverket’s strength is on counter attacks; when we were taking that away from them, we were winning. After 25 minutes, we couldn’t anymore.»