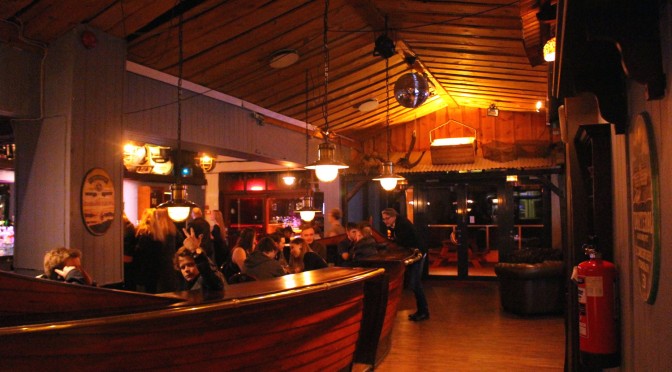 Brygga is a place with pub atmosphere. Photo: Krystof Diatka

A maritime friendly pub atmosphere could be experienced in the Brygga establishsment previously known as Tangenten.

The trio of the largest night-out locations in Molde would not be complete without the Brygga. This nautically styled pub can be found right next to its direct competitor, Kompagniet. Nevertheless, there is not a large clash between these two since Brygga is the only large place in Molde which allows entrance from the age of 18; that gives an idea of the regular clientele which can be found there on Friday and Saturday nights.

However, tipsy teenagers is not all that this place is about. It is open seven days a week and has the longest daytime opening hours of all the typical night life establishments in town, and thus it possesses a certain convenience for anyone who fancies a drink at unusual hours.

The history of the place is bound with Petrines pizza, which after a successful run, was closed in October 2015.

Even though Brygga is not always crowded, spending an evening there on one of the party nights is surprisingly refreshing considering the fact that most of the patrons present are new to the concept of legal partying, making them full of energy and good spirit. It is worthy trade-off for occasional shenanigans caused by lingering traces of puberty.

Brygga runs a pub quiz every Thursday, and in the spirit of Molde’s musical tradition, they also host regular jazz events. But of course one could just go for a nice relaxed business day evening with a pint of beer and a game of pool or darts there, which is what pubs are supposed to be about.

The establishment has been around for quite some time now. Acording to Egil Torvik, a Romsdals Budstikke journalist, it has been shaping the image of night life in Molde since the sewenties, when it used to be called the Naustgryta.

The history of the place is not just long, but rich as well. In 1983, Naustgryta was marked as the first – literally – drive-in restaurant in Molde, when in an accident a bus drove through the facade and into the restaurant. Six people suffered from minor injuries in the accident which made headlines in national newspapers.

In local newspaper Romsdal Folkeblad, one of the patrons of Naustgryta was quoted «Never window table again!» after the drive-in.

«Every city in Norway has a place like this with the real pub atmosphere and many special characters both behind the bar and in front of it,» said the manager of Brygga, Johan Sjåstad Braaten.