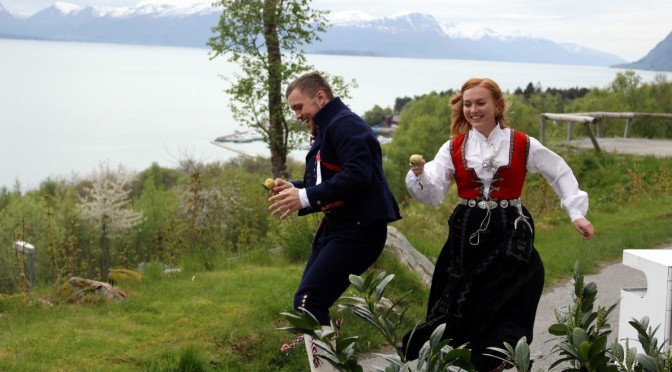 Games of 17th of May on campus. Photo: Krystof Diatka

It was the time to air out bunads again and to celebrate the Norwegian constitutional day, the 17th of May.

The population of Molde is not large and on a regular day it appears even smaller than it actually is. Nevertheless, when the 17th of May comes around the Moldes public surprisingly fills up the streets and it makes one wonder where did all these people come from.

Not that there is no reason. The 17th of May holds a large significance for the Norwegian society. It is a day when Norway gained freedom from Denmark and their own constitution.

«It is a really big day for me, the whole country gets together in one celebration at the same time,» commented student Cato Søndenå Karbøl.

The day in Molde starts with the so called barnetog. This children’s parade is believed to be the main part of the celebration by many.  The one in Molde kicked off at 10:00 AM.  Maybe it is traditions like this that lead to the great Norwegian patriotism which is hardly matched at the European continent. However, watching that seemingly never-ending stream of children moving down the streets makes one doubt that Europe is really in such population crisis which it is believed to be in.

See more photos from the celebration on campus.

As usual the Høgskolen i Molde prepared a program for its students too. It was held at the canteen where there are only a few occasion when beer is being consumed during daytime. This, in combination with a traditional boozy breakfast many went through earlier, lead to  a slightly tipsy atmosphere already at 14:00 when the event started. Obligatory sausages with lompe and cake with coffee were served, and an already relaxed atmosphere was enhanced by the games.

«This day is mainly about getting together with your friends and family and celebrating,» said student Vetle Helland.

And it truly is. The city was full of people, but most of them were grouped with their families. In a time when the traditional family looses its coherence, this is truly exceptional.

Walking around the city one could see hundreds and hundreds of flags hanging out of every possible spot. They are a reminder of union, community and patriotism.

Keep it up and proud, Norway!