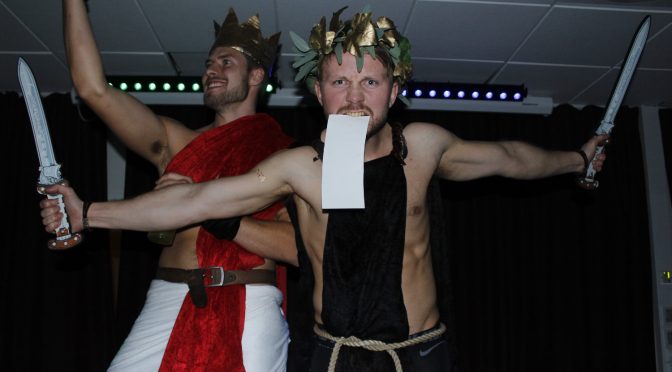 Last Friday, HiMolde students could show off their costume making/sheet folding capabilities by attending the latest themed party night at the student bar Smuget according to the toga dress code.

The formal wear once common among the free citizens of ancient Rome, a huge piece of white canvas called ‘toga’ is rather rare to be seen nowadays. Well, the two possible reasons for its occurrence might be either when someone either runs out of clean clothes, so as a last resort picks up a clean sheet and wraps it around their body, or a party with this particular dress code is required.

The latter was the case on the beginning of the weekend, as the Smuget team previously advertised, then organized this peculiar event. For me, compiling my toga was surprisingly straightforward, after watching a handy YouTube tutorial about it a couple of times, my sheet was more or less secure around me. (A knot on the shoulder and a pin to keep the layers together were the key factors.) Some others were of course a bit more creative and thorough, by assembling their own laurel wreaths, and displaying various other accessories.

Two of them, namely Steffen Lislelid and Petter Nygren overshadowed the rest in the above-mentioned skills, by dressing up as the king and his trusty general. By the organizers’ decision, they became the winners of the ‘best costume competition’, and happy owners of one coupon each for dining at the uni’s canteen. By answering a few questions, Petter let me know that he had to put a considerable amount of time and effort into making his clothes perfect for the occasion. A black velour toga, a reused leather belt, a scrupulously assembled headdress made of real and plastic flowers combined with a vast amount of creativity made the difference.

People in togas in all shapes and colors had fun during the night, as well as those who attended just in some white shirts and trousers, or dressed up even more differently from the toga code. The theme of the party could have created the ideal atmosphere for the partygoers to engage in deep philosophical conversations, just as the ancient Roman thinkers did. I am sure it was the case, at least among the natives, but my regrettable lack of knowledge of the Norwegian language does not allow me to completely verify it.

There was the chance to dance to the music provided (which was sometimes a bit repetitive, and inconsistent when it came to the volume, but otherwise nice and fun with many great hits from the Nineties), and to play table tennis in toga for the adventurous, or to try out the new bar opened for the night by ordering drinks there.

The number of participants was pretty moderate, and I tend to agree with Petter that the reason behind it was mainly the necessary amount of effort you had to make in order to create your costume, which some might have wanted to avoid. Another reason could have been that people might feel a bit out of their comfort zones in such clothes. All in all, it was a great and enjoyable party for those who took part in it, and I am already excited to learn what the next theme will be.