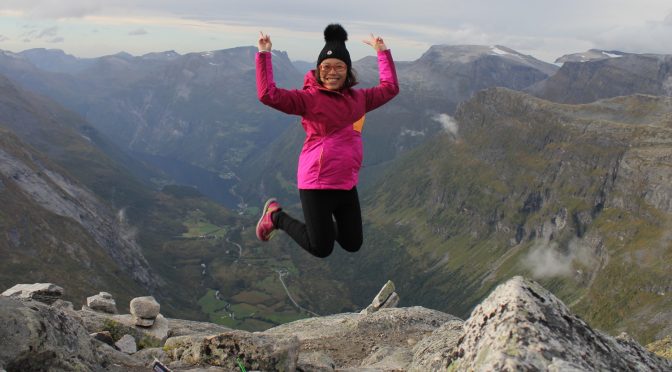 GEIRANGER (Panorama): Eager international and exchange students used the opportunity offered by ESN Molde on a September weekend to visit the iconic regional tourist attractions: the Geirangerfjord and Trollstigen.

The advertised 3-days-long trip turned out to be quite popular this year, as most of the tickets have been bought relatively quickly. Due to the massive interest, additional spots were opened, so that those who were determined to join could secure their places. A few days before the trip, the movie «The Wave» (2015) was shown for those who felt like scaring themselves with the possibility of a natural disaster that was displayed for them rather dramatically on screen.

On Friday, around noon, the bus left the college, and before it arrived to the Geirangerfjord, the students could admire a panoramic view of it from the Eagle Bend. After everyone settled down at the designated wooden cabins (with a great view of the fjord), free-time activities were on the agenda. Some went up hiking, some went down fishing, some just went for a stroll and enjoyed the atmosphere. A barbecue and various board games concluded the day.

The main activity of Saturday was the optional kayaking on the fjord, a special experience most of the attending students signed up for. Even though the water welcomed the participants with the typical rapidly changing weather of Norway, it was still a quite memorable and joyful challenge for all.

While enjoying the view and struggling to row on, the kayakers could also stop for a rest to chat (since they were paired up in double kayaks), and to recharge. Many went to the Seven Sisters waterfall, some stopped before at another one to take pictures, a few even cooled off in the water – maybe lead by the realisation that the life vests  put on for safety reasons would provide a significantly higher level of comfort if they were washed or cleaned once in a while.

After the dripping experience, the capacity of the travellers’ cold-bearing capabilities was further tested by a minor bus tour to the icy top of Dalsnibba (1500 metres above sea level), with glaciers and low degrees as the predominant characteristics of the spectacle. However the unique view made up for it yet again, so the group was just chilling, admired the outlook, and took a couple of fun and impressive pictures. In the evening, a common dinner and some card games took place.

Many programmes were squeezed into the final day, such as cleaning the cabins in the morning, and after leaving the accommodation, fjord-sightseeing on a boat. During the trip, the audience could learn many interesting facts regarding the history and stories of the Geiranger area. For instance, the legend of the Seven Sisters and the bottle waterfalls, each of whom rejected a persistent young man’s proposals, so in disappointment he turned into a bottle. After the fjord-sightseeing, the next stop was trying out a special local meal at Jordbærstova in Valldal, the «svele» pancake with home-made strawberry jam, and hot beverages.

Leaving the elegant restaurant, the Gudbrandsjuvet ravine was next in line, a spectacular water phenomenon named after an outlawed character Gudbrand from the 1500’s who managed to escape from his pursuers with his new bride by a risky jump over the narrowest point of the ravine. In the finish line of the trip, the tired but satisfied students could say goodbye to the excursion with a last stop at Trollstigen (the Troll’s Road), another spectacle of the region, where natural and engineering wonders meet, resulting in a steep and winding road stretching on for 106 kilometres between the mountains. To make the troll sensation complete, the bus stopped one last time for the students so that everyone could capture memories with the troll traffic sign, and a few metres high 3-headed artificial troll.

All in all, I am confident to say that every participant (including the cheerful and friendly bus driver) spent a great time together in the neighbourhood of one of the UNESCO’s World Heritages, and was enriched with unforgettable memories by the end of the trip.