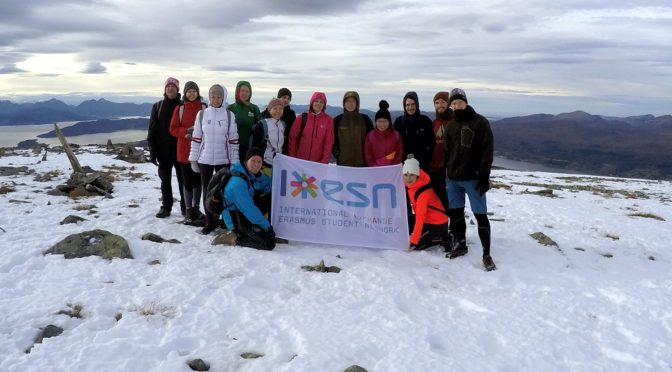 «It’s the best autumn we’ve ever had here in Molde. You should really make use of it and go out!»

No sooner said than done – and the international students at HiMolde set out for nothing less than the highest mountain top within the borders of Molde municipality, namely Skåla – 1128 meters high and known as one of the most amazing view points in the region of Romsdal.

However, the organizers actually succedeed in choosing the one and only cloudy day after almost three weeks of consistent sunshine. But that did not keep the adventurous group from climbing about 1000 meters over marsh, roots, rocks and even snow and ice – interrupted just from regular stops to take pictures from the breath-taking nature colored in all shades of autumn.

«That’s so amazing. You don’t need any TV program when having this view over the sea, the woods and even the villages around here!»

That was just one of the comments heard when the group reached the top after more than three hours of hiking. And at this time, probably everybody was at least to some extend happy that the sun wasn’t beating down mercilessly, since it was arduous and sweat-inducing to get up there with backpacks full of sandwiches that were to be eaten at the pile of stones at the very summit.

After a shortened break (due to very windy conditions that almost caused the ESN flag to get airborne), HiMolde’s summiteers climbed down and all of a sudden, even the sun graced their achievement with a short presence and some sunbeams.

Clearly, the hiking trip to Skåla turned out to be an expedition through the seasons with almost all kinds of weather– rewarded with the predicted amazing view over Romsdalsfjorden, Storfjorden, Karlsøyfjorden, Midfjorden og Moldefjorden, and adjacent Fannefjorden to the north and Langfjorden to the south, and ending up with a heated bus ride back to Molde city.