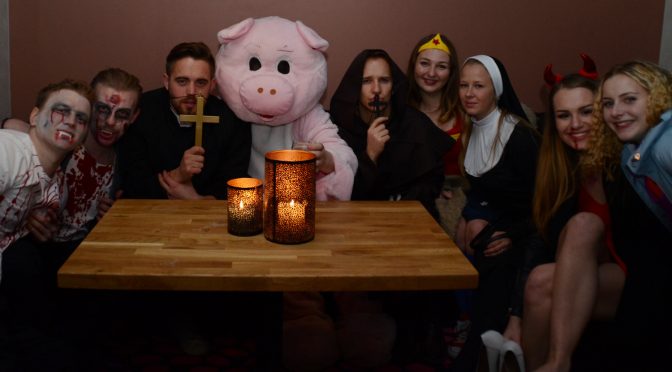 Last Saturday, on the 29th of October, HiMolde students gathered around to celebrate Halloween together by the joint organization of Smuget and Kompagniet.

Halloween or All Hallows or Saints Eve is the start of a three day long holiday dedicated to remember the souls of the passed away saints (or hallows), faithful people and martyrs. It is mainly a western Christian tradition, probably with pagan roots from Celtic harvest festivals and the Gaelic festival called Samhain, according to Wikipedia. The current version of celebrating Halloween has spread from America through the world, by a certain degree at least. Trick or treating, for example, might still not be that common in Europe, but the costume party is widely accepted, if for nothing else, as an excuse for holding a party for (young) adults as well.

Since today is the original date of Halloween, it is an ideal day to recall the memories of the latest themed party offered both for HiMolde students, or everyone who was interested in joining. Since the dress code was «scary», most of the participants made an effort to have at least some (hopefully artificial) blood-stains on their faces to pass. Many others however took it to the next level, and managed to create (or receive) complex make-up art, showing off rather creepy complexions. The surroundings also enhanced the authentic Halloween feeling, with some jack-o’-lanterns, skeletons, and other frightening sceneries either lying around or showed on screens.

Since a Halloween party is also a great platform for engaging in cosplays, various fantasy and sci-fi characters could represent themselves. The DC universe was particularly favoured this time,

since we could see some Batman, Joker, and Harley Quinn walking around, but also Super- and Wonder Woman were there. Other recognizable characters was the (Super) Mario Brothers. The vast majority were dressed as general characters, like witches, zombies, skeletons, bloody nurses and doctors.

One such doctor was Anders Naas, a deck officer student at Fagskolen in Ålesund from Fræna, who was the lucky winner of the costume competition this year. His impersonated character from (probably) a horror movie was a «doctor, that is kidnapping people for harvesting organs to survive.» (If this movie sounds familiar to you, feel free to write down the title in the comment section!)  Anders thanked his cousin, who helped him out with the make-up, which took approximately 1,5 hours. In his opinion, the party was overall okay, but he suggested, that the party goers should try to be a bit more inventive regarding the costumes next year.

In general, I would say it was an enjoyable evening, with quite many people, dancing inside, and talking at the sofas or outside.