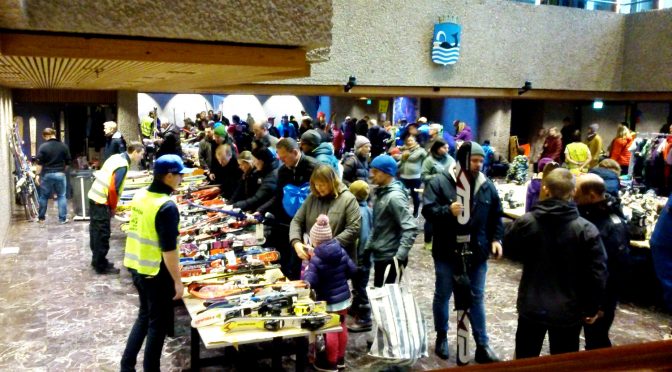 Molde Sports Association (MOI) called for the annual swap meet for winter sports gear – and apparently the whole region set out for the bargain hunting.

Molde Rådhusplassen, 9 a.m. last Saturday:  It was one hour to go until MOI’s swap called «byttedagen» was going to open its doors. At the moment, only three brave citizens stayed out in front of the entrance. One of them, Ole Martin, succeeded in getting to the pole position in the race for the hottest winter deals:

«I am looking for skating skis. Last year it was already crowded at 9:30, so we wanted to be here early enough this time.»

And he later should be proved right, being one of the early birds this morning. Through the big window of the town hall one could see volunteers carrying products from one corner to the other, and preparing for the big rush.

About 1500 products from alpine and cross country skis to bobsleds, hockey sticks  boots, ski jackets and pants waited to be found by new owners.

«This year we have much more cloths than ever before. So that is good for the girls. The guys mainly come for skis and hockey shoes», Mona Hustad from MOI laughed.

Friday evening, she and 22 volunteers took delivery of the equipment brought for sale, checked it together with experts from a sports shop, and aligned it according to the product type.

«We were here until 22:30 in the night, but it is so much fun organizing it. And all the people around really like this day», she said.

Time leap to Saturday 9:50: It was only ten minutes until the sale starts. Meanwhile, people queued up over 200 meter all over Rådhusplassen and Storgata; most of them was perfectly equipped with measuring tapes, huge blue IKEA bags and a fair amount of cash money.

Exactly two minutes past ten, the doors finally opened and people sped up as soon as they were in, aiming to get the best products available.

«Skis? Right there.» «Boots are on the left side, just up the stairs.»

The MOI volunteers tried to direct the huge crowd. While the first bargain hunters departed again with a satisfied face, some still waited outside to get in. That day the Molde Town Hall really resembled a sport shop ,with children sitting on the ground trying on ski boots and guys adjusting bindings for skis.

After 30 minutes, the big rush was over, with the majority of the products having found a new proud owner – and will maybe being sold again next year when MOI calls for the next swap meet.