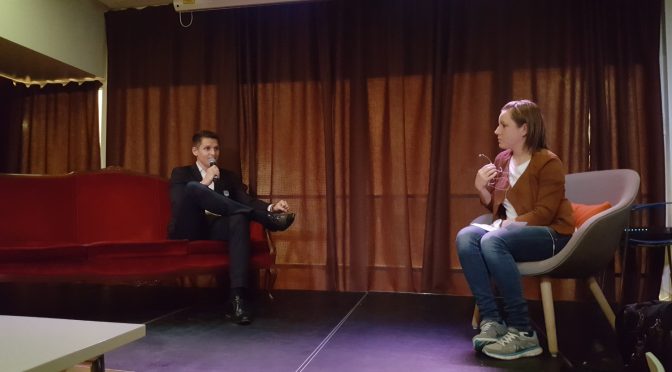 «You probably know more about sport management than I do at the moment.»

That was the words Oddvar Talset from MFK used to raise HiMolde’s sport management students out of their sleep.

Thursday morning, even before the sun felt like waking up, about 40 bachelor’s and master’s students in sport management were up and present at campus for a breakfast meeting with Oddvar Talset, the current marketing director of MFK, Molde Fotballklubb.

This time the master’s students were challenged to prepare questions for the interview. Having more questions than there were minutes scheduled for the meeting, everybody was all set. Free breakfast, nice company, and a great start of the day, which almost makes you forget about waking up at seven in the morning.

Talset has been working for MFK since December 2012, so he was the perfect point of contact to get to know more about the managing and marketing side of our local elite football club. After the end of the football season here in Norway, MFK is already very busy with preparations for next season.

This week specifically, they resigned their general sponsor for the upcoming three years, so it was time to suit up and help out the students to gain some insider knowledge about the life of a marketing manager:

What does a normal week at the club look like?

«A normal week consists of a lot of meetings, we have about 130 partners whom we want to have 10 meetings with every year. So you can imagine that there goes a lot of work into contract development and follow-up. Also, let’s not forget about our private development for our wonderful audience!»

Are there differences in pre-season, in-season, or after-season?

«You can actually devide the season into two parts: right now we are in the sales part of the season, and in April we are in the hosting part of season. Since we have that many partners, we are currently very busy maintaining all of our contacts and contracts, resigning, and preparing for the next season. From April onwards we are in the hosting part of the season, where the main priority is hosting all of the games, making sure the fans are happy, and try to get the most out of every season as possible.»

Is social media still a driving force in sports marketing? Is it a good or bad medium?

«I think it can be both, but I find it to be extremely important to engage with our fans and to create a dialogue. It’s a possibility to communicate, we try to engage the fans to have competitions among themselves as well. From when we started these initiatives in 2013, we have doubled up in the amount of followers, so that is a pretty big increase. It makes it therefore even more important to make good use of it. We try to give our fans some insight in the club so they can experience how we work and what we stand for as a club.»

If you could change one thing in football, what would it be?

«On an international level, the most important thing I would change is the salary of the players.»

To conclude, some advice was handed out regarding future internship positions and possible interesting thesis topics, so students had some more to chew on.

One thought on “MFK marketing for breakfast”