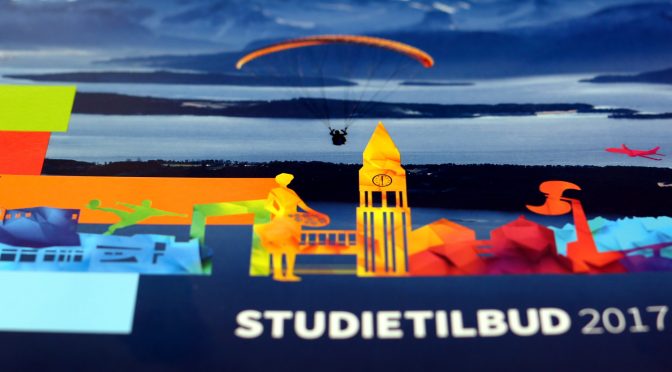 We are at the threshold of 2017, and regardless of occupation or who we are, we are all hoping it will be a meaningful year in our lives. Together we can do much to achieve that.

The title of this text paraphrases the subtitle of the bestselling book «Small is Beautiful» by the British economist E. F. Schumacher, published in 1973. It’s full subtitle is «A Study of Economics As If People Mattered».

I admit I have only browsed the book, but the subtitle hit me the first time I saw it, prompting the question: Are those of us that possess top positions in society developing economies, organization structures and organization cultures as if people mattered? And in universities, are we developing organizations as if our employees, the students and the wider public mattered?

The other day I glanced through our new brochure, for the next study year. It gives evidence of whom we want to be, namely a university that meets the students at a personal level. The students that feature in the brochure testify to this. They appreciate the smallness of our university. Not smallness in itself, but the small distance among students and between students and staff. A space where people meet, acknowledge and respect each other regardless of hierarchical positions, gender, nationality, religion etc. A space were people matter.

One of the topics I recall from my own studies in sociology 35 years ago, was that large bureaucracies were described as slow, impersonal pyramids that is almost impossible to change. Because information is frequently twisted on its move up and down the bureaucratic structure, if it is moving at all. In any case, bureaucrats, however good-minded they might be, were described as rule-oriented rather than people-oriented. On the one hand, this behavior left bureaucracies unable to change to shifting conditions and acknowledge the specific personal history of the individual. On the other, we learned that the great German sociologist Max Weber regarded bureaucracies as very efficient machines, yet he feared that they easily turn into iron cages, prisons where the human being is ridden of its personality and humanity. A space were people does not matter much.

In the early 1980s, bureaucracies were not held in high regard. The then American president Ronald Reagan promised to roll back the state and let loose the mechanisms of the market. In the UK it was the decade of Maggie Thatcher, who likewise introduced what many European citizens have learned to know as the New Public Management model, emulated after the market. At present the model is about to be as disapproved as was the former bureaucracy. Admittedly a wonderful machine if you want to manage by numbers and not personal relationships. But it has not kept it’s promise to be less bureaucratic and free people from the iron cage.

It is possible that my memories as a student were coloured also by one of the management heroes of the time, the then president of Scandinavian Airlines System (SAS), Jan Carlzon. His published a book that was seen as one of the most important non-academic books on management of the 20th century. The English title was «Moments of Truth», but I think perhaps the Scandinavian title, «Tear down the Pyramids», is more telling. No matter what, SAS and Carlzon’s popularity was in the 1980s what Tesla and Musk, or Apple and Steve Jobs, is in our era.

Carlzon’s ideology fit into the spirit of the time. He turned SAS around from being a centralized bureaucracy, and one of the less punctual airlines in Europe, to maintaining a decentralized flat organization structure that produced the most punctual and profitable airline. His ideology was that problems have to be solved where they arise, in interaction between the people directly involved. «Problems are solved on the spot, as soon as they arise. No front-line employee has to wait for a supervisor’s permission», he said.

The morale of the employees soared, and the customers were attracted to SAS in increasing numbers. People mattered. Until Carlzon went astray in the context of his own success. Towards the end of the decade, SAS started to run hotels, travel agencies and limousine transport in an effort to wrap the entire travel for the customer and expand the company. It went badly, and Carlzon later admitted that he had disregarded his own philosophy and the customer. The customers never asked for these services.

I know it is a long time since the 1980s. I know there are different challenges now, yet they are perhaps the same? At the end of the day it is still about who matters, isn’t it? And how we organize to cultivate people’s talent.

To put people at center is easy to say, but evidence shows us it is far more difficult to practice. However, it is also a matter of approach. Of will. My wish, and what I will be working for in 2017, is exactly that Molde university is organized as if people matter. As if students matter. The preconditions are good. The campus is compact, the facilities amiable. People meet. Surely, we all possess roles and positions and have duties to perform and criteria to meet, students and employees alike, but we are not locked up in iron cages beyond the point where we cannot work on realizing our talents.

So, let’s do it together. Let us keep our university a good experience.

This is my wish for the new year.