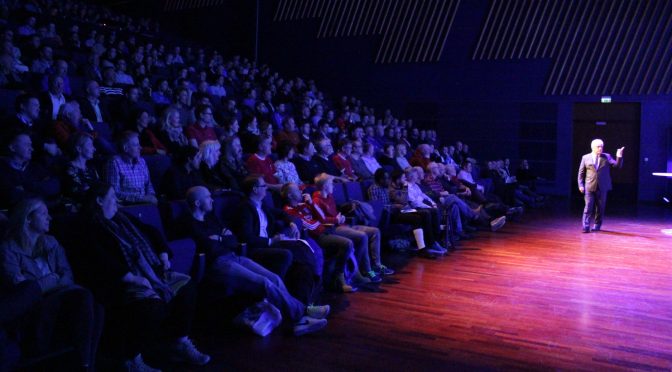 Monday night, Liverpool legend Kevin Keegan had his much-anticipated seminar in Bjørnsonhuset with the title above. Several hundred spectators showed up in order to hear the both educating and entertaining words of the former football star.

The “Mighty Mice” (169 cm, 66 years old), came prepared, starting his presentation with a comparison of two ski-jumping heroes, the Norwegian Anders Fannemel, previously holder of the world-record, and Eddie the Eagle, who made it to the winter Olympics. He also highlighted the difference between the beer prices of Norway and England, which explains why the English players were less enthusiastic to travel to Norway despite the great atmosphere Norwegian fans created. Moreover, the Norwegian national team managed to defeat England, with Keegan on the field, in Oslo in 1981 (World Cup qualifiers), which was, Keegan says, a major shock to English football.

The audience got the wide picture of the life of a famous football star like Kevin Keegan: a video recording of him falling of a bike inspired people to get on a bike, he sang on three music albums, and were in touch with politicians like Margaret Thatcher and Tony Blair, and he was the subject of 42 books, but wrote only one himself.

His advice to the audience: “Find something you love to do, and as a man, this should be what you get paid for.” His conclusion: “Football is the world, if you have vision.”

As an aspiring young player, he started his career at Doncaster Rovers, originally wanted to be a keeper, then came Coventry City. At a selection process, there, out of 250 young children, only him and one other player were selected. They didn’t offer him a contract after the trial period, neither at Doncaster, because they felt he was too short. It meant that he had to move on, to partly work at a company called Peglers, and play as an amateur there. He was spotted, and signed by Scunthorpe afterwards. This period gave him “empower”, one of the several key terms he used during his presentation, and a term that have helped him through his career.

After more than 170 matches played there, at the age of 20 he left Scunthorpe and the 4th division behind, moving to Liverpool and fame. There, he gained «knowledge” (“Power comes from sharing knowledge, not keeping it”) from Bill Shankly, the famous coach of that time. Shankly gave him absolute trust and freedom on the pitch, which had a boosting effect on his confidence. Shankly told him as a tactical briefing: “Just go out and drop a few hand grenades all over the place, son”. He also learned the importance of “leadership” from team captain Tommy Smith, who always showed the way to him and the others in the team. After spending seven years with Liverpool, the prime of his career, winning three top division titles, one FA cup, two UEFA cups, and one European cup trophy, he moved to Germany.

At Hamburg, first he didn’t feel welcome, he didn’t speak the language, so he had a rough time. But it gave him “resilience”, moved him out of his comfort zone and he spent three successful years there, winning the Bundesliga and reaching the final in the European cup, and gaining the highest individual achievement, winning the Ballon d’Or twice in a row. After leaving Germany, he moved back to play a couple of seasons with Southampton ending up 2nd in the top league (“should have won the league with 8 great players»), and Newcastle, helping them promote to the first division.

Other key terms like “attitude” and “discipline” were highlighted by Keegan, as important concepts in any profession. Setting high “standards” and few limitations for yourself deemed important as well. Introducing his experiences regarding coaching, he mentioned one of the best English players of the ‘90s, Alan Shearer from Newcastle, as an example for the term “reputable” (build your reputation by helping others build theirs).

“Spirited” (believe and you are half way there), “delivery” (always give people more than they expect), and “luckiest” (luck is what you have left over after giving 100 percent).

He provided a detailed list of coaches that spent amazingly little time as managers of English clubs. (Possible record: 10 minutes on the bench of Torquay United by Leroy Rosenior.) Naturally, the rivalry with Manchester United was not left out, as he mentioned the not exactly friendly relations he had with Sir Alex Ferguson, and a spectacular half volleyed goal by him against MU that were wrongly disallowed (called offside, but it was really not), and a 5-0 win against them by Newcastle, as a coach.

To conclude the seminar, he shared some more inspirational sentences like “don’t ever do anything half-heartedly”. He paid gratitude to people that had helped him, people that wanted to share, so his advice for the public was to pay attention to people you meet, because they might become important to you later, in your career or otherwise.

After the seminar, Molde FK tickets and unique jerseys for the English national team from Keegan’s time were allocated to the lucky ones who were drawn by the lottery. Then, Kjell Marius Herskedal, who recently defended his PhD at Liverpool John Moores University in Leadership & Sport Psychology, and is working at Molde University College, had a chat with Keegan.

According to Keegan, you can play soccer well and lose, and play bad and win, but in the long term, if you have 6-8 reliable players in key positions, you will succeed. Regarding his striker past, he said the trust he got from Shankly was empowering, and he felt he could really achieve anything against anyone. That is the mental state he recommended for the future players, besides taking personal training seriously.

“Your fitness is something you can be in control of” – as he put it.