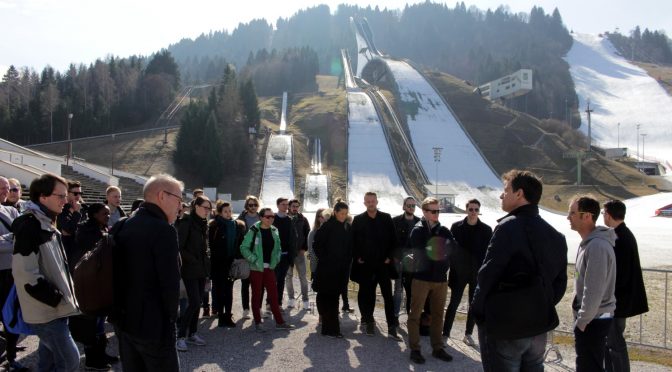 GARMISCH-PARTENKIRCHEN/INNSBRUCK (Panorama): After five days in Germany, the 16 Sport Management students from HiMolde and 15 students from Johannes Gutenberg University of Mainz headed on to Austria to finalize this year’s study trip about event management.

The Alps are calling – and 31 slightly exhausted, but still excited students – followed. First stop: Garmisch-Partenkirchen, annual host of World Cups of both alpine skiing and ski jumping. When Bruno Vogt, director of the Olympic Trainings Center, showed us the facilities, we luckily got the chance to talk to the German skier Fritz Dopfer, who is one of the athletes practicing there. Afterwards, we could also get a glimpse at the storage for the equipment they need to prepare the slopes for the World Cup. No-one of us had ever seen such a huge amount of snow shovels before!

To round out the knowledge about the venue, our group visited the exhibition “The dark side of the medal” and went on a short time travel back to 1936, when Garmisch-Partenkirchen hosted the Olympic Winter Games and thereby became a historical landmark for the Nazi propaganda machinery.

To increase our knowledge about the Olympics even more, we moved on to the next Olympic city in the evening, namely to Innsbruck/Austria that was host of the Olympics twice, as well as of the Youth Olympics in 2012, and might bid for the Winter Games in 2026 – thus, a perfect destination for our field trip.

The first visit on the agenda of our penultimate day, was a guided tour through Innsbruck’s Olympia World consisting of a football stadium (compared to the Allianz Arena we visited two days ago, a quite cozy venue, but here we were allowed to step on the field what was an absolute no-go in the German stadiums), an ice-skating track, an ice-hockey rink (which we were also allowed to enter) and a multi-purpose hall.

Our second visit of the day led on to the Bergisel Ski jump center high above Innsbruck, and provided us with a breath-taking view from the top of the tower over the whole city and the surrounding mountains. Since the tour was a held by a professional ski jumper, we did not only get information about the venue, but also about ski jumping itself, the technique and the equipment used.

The rest of the day was again under the banner of the Olympic Games, more precisely of the Winter Youth Olympic Games, that were hosted in Innsbruck in 2012 for the very first time.

For the very last lecture of our trip, we went from the Olympics to the FIFA World Cup and Qatar as its controversial host for 2022. Gerald Fritz, a PhD student at Johannes Gutenberg University who had lived in Qatar himself, gave us some information about the country and its inhabitants. This topic was of such great interest for the whole group, and if we were not that short in time on the last day, this last lecture could have lasted for hours.

However, there was still one item on the agenda before going back to Molde: the “Symposium in Sport Economics and Sport Management” held in the University of Innsbruck, which was a great opportunity for networking with other students and professionals from the sports management branch, and for getting ideas for our own Master theses.

On behalf of the 16 HiMolde students, we hereby want to thank Prof. Dr. Holger Preuss and Gerald Fritz from Johannes Gutenberg University of Mainz for organizing this amazing trip. A special thank goes also to our fellow students from Germany who made these eight days an unforgettable experience also in social aspects!