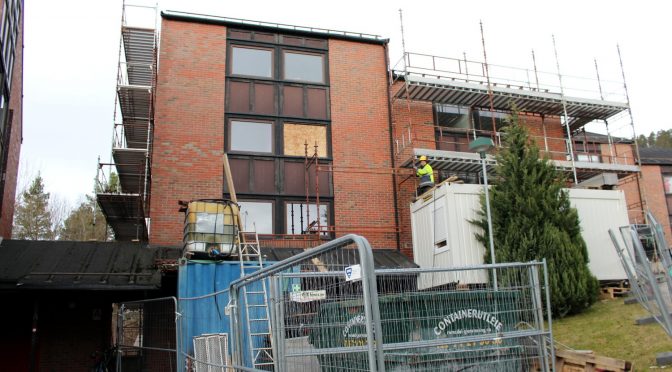 Although covered in a scaffold, the front of block B will remain the same. Photo: Raphaela Ossberger

If you passed by the student houses at Kvam, you might have realized that one of the buildings is totally covered in a scaffold and a lot of construction site vehicles stand around there. Panorama has the details about the ongoing renovation of block B.

Hammering, drilling, banging: Students living in Kvam know these noises just too well – because they get woken up by it every morning. Since the beginning of the summer semester, block B of the old student housing west of the University is being renovated, first by starting to scoop out all the apartments. In total, one two-room and six four-room apartments currently get a new face.

“The buildings were built in 1979-80, so they are all more than 35 years old. Our evaluation showed that they are ripe for a thorough maintenance and rehabilitation”, Knut Silseth, director of SiMolde, which is the building owner of Kvam, explains the reason for the renovation work.

SiMolde will invest around 45 million kroner into the renewal of all five buildings.

A construction crew of about ten to 20 men works at the site. Primary task is the isolation of the buildings in order to meet the standards of Enova (a public governmental enterprise for sustainable and environmentally friendly energy consumption in Norway).

“We really hope that we can lower the energy costs”, Ivar Magne Grøtta, janitor of SiMolde’s properties, stresses the point that energy efficiency is a key aspect of the renovation.

Additionally, a new ventilation system and a new roof will be installed. To improve the fire security, also the fire exit stairs will be renewed. Apart from that, the front of the building will remain as it is.

While there won’t be any changes concerning the occupancy, for the future residents will enjoy some more comfort: Unlike now, where the Kvam-tenants still have to use LAN cables in order to have internet connection, the new flats will be equipped with WiFi (in addition to the existing LAN). Also, the kitchen area will consist of two kitchen units instead of only one, like it is at present.

“Generally, we want to have the same standards in Kvam as in the new Campus buildings”, Knut Silseth and Ivar Magne Grøtta agree.

The rental fee will be slightly higher than in the old apartments, but still below the one tenants at Campus pay right now.

If everything goes well, the renovation of block B should be finished in the beginning of July this year. Shortly afterwards, block A will be taken on, followed by block D at the end of the year. In 2018, all five buildings should be totally renovated and available for full use. Until then, the remaining residents in Kvam have to cope with being shaken out of the sleep by hammering, drilling and banging.