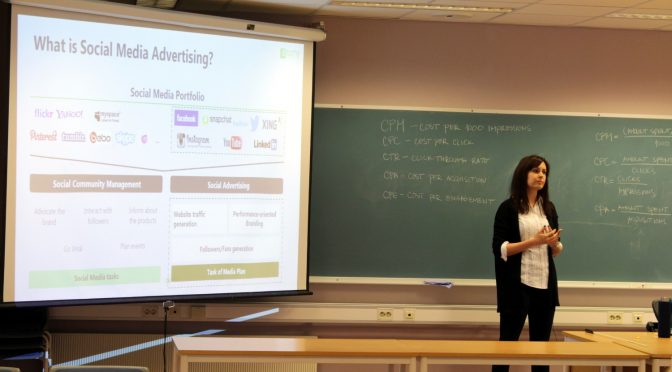 This message from Marija Citic is not a threat – it’s the reality. HiMolde students got to learn about that in an open lecture about social media marketing straight from an expert’s mouth.

Clicks, likes, and followers – that’s what most of us know. But there is so much more than that. Two weeks ago, Marija Citic, who is account manager at a fast-growing German social media advertising company called “esome”, gave a crash course on social media marketing, and how one can measure user activities on social networks.

Since social media advertising captures a very broad field nowadays, it was necessary in the beginning to define what this actually implies. Marija Citic thereby distinguishes between two kinds of tasks. On one hand, there are the classical social media tasks, namely interacting with followers, informing about the product and finally go viral with the brand and the messages. On the other hand, social media managers are advised to have a media plan whose task is mainly to generate followers and traffic on the website.

In that respect, she also explained the so-called “purchasing funnel” every social media campaign goes through: The first stage is usually about creating awareness through all possible networks from Facebook and Twitter through to Instagram and YouTube, as well as career networks such as LinkedIn. The focus of that initial step is simply to advertise the brand to the public.

What follows after this is to make users actively engaged with the brand and consequently try to make them interacting. Finally, the campaign aims to make people buy the product. A step Marija refers to as “transaction” and “acquisition”.

To evaluate if a campaign is successful or not, social media manager not only look at the obvious numbers. It is also crucial to know with which devices the followers use social media and on which network the company receives the most traffic.

To say it with Marija’s mouth: “You are tracked on pretty much every website you go to!” However, in that respect it’s not the quantity that matters, it’s what you make out of the data: “That is the backbone of social media advertising: making the generated data useable – and how you use the data”, Marija, who is a real tracking specialist and currently working with 10 clients – including the British company Dyson and the Norwegian Cruise Line – stressed in her lecture.

While most of us know how to rate likes and followers, Marija additionally also looks on other numbers, for example the click-through rate which measures the amount of page impressions and how many users finally actually click it, because this is what finally contributes to the companies’ economy. The higher those click rates, the lower the average cost per click. This analysis is therefore in stark contrast to the ordinary numbers on social media, such as likes and followers, which are usually desired to be as high as possible.

To monitor and analyze all this data, Marija uses Facebook pixel to stay on top of all that. During the lecture, she used the Facebook page of one of her clients to show all the graphs, percentages etc. you can obtain with that application.:

“Actually every one of you can use Facebook pixels. Then you can see where you leave your tracks on the web.”

This advice should probably only be taken by the very brave ones of you, since it is kind of frightening what the networks know about you, namely more than you know that they know.

Therefore, social media marketing is definitely one of the markets for the future, but at the same time that seems to be a serious threat:

“That field is growing a lot – and it’s probably too much. You have it everywhere, and at some point you are just tired of it.”