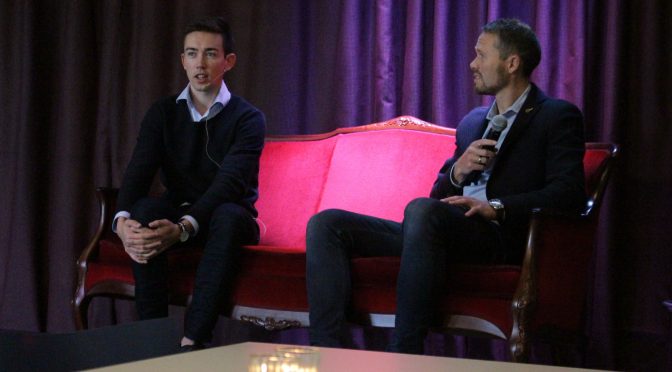 Monday, Daniel Hov, a former Sport Management student at HiMolde and now head of marketing and media at Sandefjord Fotball, talked to current students about his career and how he managed to realize his dream of working in the football industry.

«I remember my first day here in Molde. I was standing alone at the opening ceremony, I did not know anyone here and just thought ‘What the hell am I doing here?’»

The story Daniel Hov started this semesters first Sport Management breakfast meeting with, was probably familiar to most of the current students.

«But finally, the time here in Molde made me grow, and the time at HiMolde was very important for my career in the football branch.»

Daniel had always been dreaming about finding a job at a football club, and the bachelor studies strengthened this dream even more.

«Together with some fellow students, we even did a field trip on our own to Stavanger just because we were so interested in the football industry. It is important to know that you have to give of yourself to get something.»

«It’s the club that is closest to my hometown Tønsberg, so I just asked them if they need anyone, like for a summer job. But the club had no money – so no summer job for me. But they offered me to work as a volunteer, and so I travelled between Molde and Sandefjord for every match.»

Consequently, Daniel did his internship at Sandefjord Fotball and finally ended up being head of marketing and media. In this position he is responsible for making people pay attention to the club, but also for setting up actions that increase sales.

However, as Daniel explained, the atmosphere at the club is highly dependent on one factor: the first team’s results.

«The results affect everyone. I am actually doing the same whatever the result is, but when the result is bad, I get bad comments on my work although it’s basically the same as when the team wins.»

Still, it is his dream job and he enjoys working with the players and travelling with the team.

«I really reached what I had been dreaming of, also thanks to the courses at HiMolde. Now I have to aim for the next level to keep myself motivated, which is working at a bigger club.»

Since Daniel recently supervised Anette Ree, a current Sport Management student from HiMolde, during her internship at Sandefjord Fotball, Kjell Marius Herskedal stressed the importance of creating a network of former and current students in order to find internships or regular jobs after the studies.

Finally, Daniel had one advice:

«Go out of your comfort zone – then you will learn and you will grow!»