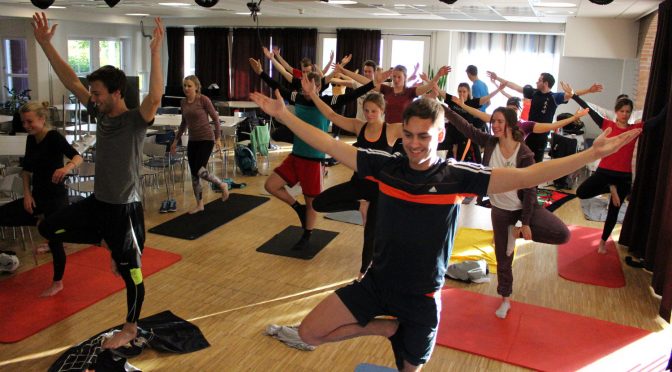 The premier of ESN Sport Weekend provided the participants with the theoretical framework about running and taping and finally pushed them to their limits.

The organizing team around ESN’s new vice president Nikola Krahulcova, Tomaš Nedoma and Eduardo Perdigão Drapier set up a varied program that catered for everyone.

The first day got kicked-off with a lecture about the basics of running. Pavel Brlica, personal coach of several Czech runners and currently a student at HiMolde, gave an overview about biomechanics connected to running and different running techniques: “Everyone has a different technique. The right style for everyone does not exist, that is impossible.”

Additionally, he had some tips and hints about how to make an ordinary run more exciting, for example by finding new routes, or “Run naked! Not physically naked, but without your mobile phone, earphones, any electronics, just you and your running shoes!”

Afterwards, the participants had the chance to record a short sequence of each individually in the running belt and get a profound analysis of their running technique and some advices from Pavel.

But what brings the best theory, if you don’t know how to use it practically? Therefore, the workshop continued outside, starting with a short run from the university to the playground next to Campus. There, it was time for the ‘running alphabet’, a series of different running styles that improves the running technique and challenges the coordination skills of the participants.

To calm down after these first activities, the scheduled lesson in yoga was more than welcome to have a smooth treatment for the runners’ legs. For some, yoga was probably more demanding than expected and it wasn’t long until “uuuuh” and “oooh” outcries were hearable.

On the second day, Tomaš provided the participants with an introduction into taping, a treatment method, where elastic tapes are attached to the skin in order to support the body’s natural recovery and healing process or to stabilize joints and muscles. After some theoretical explanations from Tomaš, who is the co-founder of the biggest taping company in Czechia, the participants themselves could attach some strips and get individual tips for treating pains and tensions – especially after the running the day before.

But the real ‘boot camp’ of ESN’s first sport weekend was yet to come: a crossfit circle, conducted at the forecourt of HiMolde. The high stairs at the stand and the circular square offered perfect conditions for a tough 40-minute workout with jumps, lunges, push-ups – and some wondering (or envious?) gazes from other students passing by.

The final item on the program was a relay race with running and exercises. Cheered by friends and parents, 19 brave warriors fought for every meter around HiMolde’s B-building and provided an atmospheric culmination of the weekend, with the best end for the “Flying Dutchmen” who finished in first.