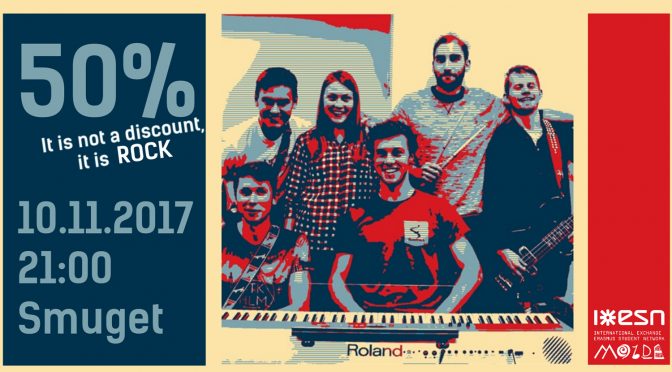 ESN Advertisement for tonight's concert with 50%.

In the past two months a group of international students started to get together to play music and have fun.

The project started with Rolf Magnus Orø, the SiMolde student environment coordinator. He said that the idea is to inspire people to work together, get to know each other and provide tools for students – from those who are used to doing this at home to those who just want to try something new.

HiMolde is providing the equipment – which includes five guitars, viola and drums – and the practice space. The group meets once or twice a week, depending on the school schedule and class assignments. The rehearsal and music choices are all chosen by the students themselves. Rolf said that he only provides the tools for them to do what they want.

Last week I went to watch a rehearsal, and afterwards I talked to the band. Their name is 50% and its members are Sarp from Turkey in the drums, Simen from Norway playing bass and guitar, Luca from Germany playing guitar, Pavel from the Czech Republic on guitar, Ilias from Belgium on the piano, and singer Anastasia from Belarus. All of them have years of musical experience.

I asked Sarp why the name 50% and he said: “Because when we were practicing the songs, I was saying like ‘Ok, this song is half done, 50 percent done, or almost done, 90 percent’, so at the end Pavel said ‘Maybe the name of the band should be 50%.’”

Now the band is preparing for a concert tonight, November 10th at Smuget. They have in their playlist music from The Cranberries, Muse, Ghost and a lot of others which they didn’t tell me about, wanting to keep it a surprise. But for what I could see during the rehearsal, it will be very nice.  Last Friday they gave us a glimpse of their talent by performing three songs at Smuget during Open Mic, though Anastasia wasn’t there.

While talking to Rolf about the concert next Friday he said :“I’m really looking for it! They surprise me last week and I will be there helping and watching.”

I believe all of those who were there to watch them last Friday had fun, and will be looking forward to seeing them again tonight.

So, tonight, Smuget at 21h – 50% concert. The Panorama crew will be there covering the event and so should you! Lets Rock!