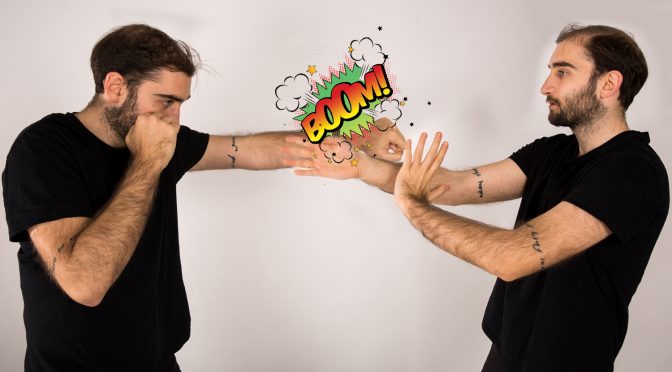 Drummer, martial artist, and crazy about Besiktas and tattoos. No, he is not a bad boy, but one of the coolest guys at HiMolde University. I’m talking about Sarp Tezornarici from Turkey!

Sarp started to play the drums in 2008 while still in Turkey, and is now the drummer for the 50% band at Hi Molde University. They had their first concert together a couple of weeks ago, and will play again next Friday at Smuget during the End of Semester Night provided by ESN for all students at Hi Molde.

When asked about his drums experience, he said: “I started to play in 2008, and it always help me to free my mind. It feels social and very nice to play with a band in school, I like the band members and we really enjoy, laugh in the rehearsals. Also, it was nice to have the chance to perform in the school, even though I was a little bit nervous and couldn’t perform as good as I want, but next time will be better!”

As a great martial artist, Sarp tends to take the best philosophies of martial arts into his every day life. A very calm and nice guy, his years of training allow him to be very patient. Sarp practices Wing Chun –a type of Kung Fu – that requires a lot of concentration.

He said: “When I was training in Turkey, it became half of my life, I went to trainings four times a week without giving it a break for 3.5 years. Martial arts helped me to feel self-confident. I would love to start train again if I can find the chance.”

Currently Sarp is looking for a place to train where he can possibly teach other students.

Sarp has a tattoo on his right arm, which is inspired by a quote from Aragorn from the second Lord of the Rings movie. During the Battle of Helm’s Deep, Aragorn says that “There is always hope”.

Sarp uses that as an inspiration to always keep positive, even during the most difficult of times.

On his left arm he has a deeper phrase that he took from a metal song called The Quiet Place from the band In Flames.

According to Sarp’s own words: “In law school, we had a lecture named ‘Theory of State’, where a professor was explaining how kings became kings in past, and how people obeyed them. Now this system seems to be changed, but people’s logic is not so different. That inspired me. Everyone thinks they are the good or just kings in their own mind, even if they are actually selfish. But everyone can take this differently.”

He got both tattoos in 2012 and has plans to do more, but wants them to be unique and special.

Make sure you go to see Sarp play the drums this week at Smuget, knowing that this nice and multitasking guy from Turkey!